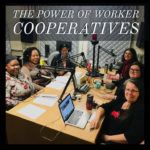 Rebecca Kemble was first struck by the power of worker cooperatives when she became a cab driver at Union Cab Cooperative nineteen years ago. Since then, she’s advocated for worker cooperative models, which transfer ownership, decision-making and control into the hands of laborers. On today’s show, Kemble hosts the show and invites a bevy of […]