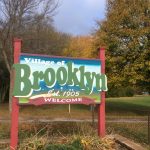 Yesterday, Brooklyn’s village President, Brit Springer, was voted out of office — despite not facing a formal challenger.  Springer was issued a resounding defeat by write-in candidate Mark Bruner, who garnered 75% of the vote, or roughly 244 ballots. But she wasn’t alone in her defeat; in addition to Springer, three other Brooklyn trustee races […]