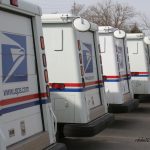 On Tuesday, succumbing from political pressure, Postmaster General Louis DeJoy announced that he is suspending plans to cut back or even to dismantle much of the United States Postal Service. Also on Tuesday, Wisconsin joined fourteen states in a federal lawsuit claiming that cuts in postal services are an effort to obstruct voting in the […]

Postal Unions will mobilize Thursday with a national call-in to Senators to prevent what they see as counter-productive changes to the postal service as well as for the passage of a COVID-19 relief bill. Changes in procedures initiated by the new Postmaster General in July sparked the mobilization. The National Association of Letter Carriers and […]