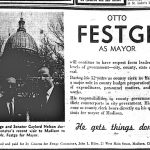 Madison in the sixties, early April – the only liberal elected mayor. The mayoral election of 1965 is polite but partisan and gives the city a clear choice between continuity and change: Conservative businessman George Hall, who ran the successful mayoral campaigns in 1961 and 63 for conservative businessman Henry Reynolds, and Dane County clerk […]