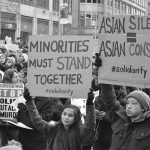 On March 17th, Georgia prosecutors charged Robert Aaron Long with eight counts of murder stemming from a series of shootings at three Atlanta-area spas.  Although six of the eight dead were Asian-American, the Cherokee County sheriff and the F.B.I. stated they did not believe the crime was racially motivated. Asian-American activists and Georgia politicians, including […]