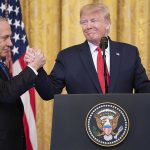 Last week, as Trump signed the U.S.-brokered agreement to normalize diplomatic relationships between Israel and the United Arab Emirates and between Israel and Bahrain — the so-called Middle East Peace Plan, demonstrators outside the White House protested the “Fake Peace Deal”. Huwaida Arraf, International Human Rights Attorney and founder of the International Solidarity Movement for […]