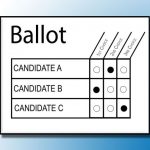 Maine has been a leader in clean elections since the late 1990s. Now, Mainers are leading again by passing a cutting-edge reform in the voting process itself:  Ranked choice voting, also known as instant-runoff voting.  Passed by referendum in November, Maine’s ranked choice voting will apply to races for Congress, Governor, and State Legislature but […]