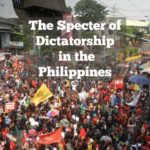 Since Rodrigo Duterte took office as president of the Philippines in June 2016, there has been a surge in extrajudicial killings for drug-related allegations. Duterte’s controversial “war on drugs” now has a death toll of at least 20,000 Filipino citizens. Over the course of the hour, Allen discusses the current political situation in the Philippines […]