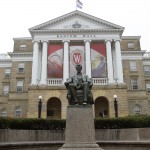 (WORT)–Swastikas and images of Adolf Hitler posted to a Jewish student’s door. A healing ceremony recognizing Native American victims of sexual assault, heckled with Hollywood-style “war cries.” Black female students pushed, spat on, threatened, and told they didn’t deserve to attend the UW-Madison. These are only the most recent reports of racially-charged incidents that many […]