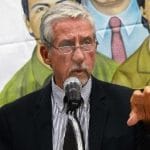 We think of Tom Hayden as an anti-Vietnam war protester and organizer, but he also drafted legislation to address World War II compensation for those used in forced labor in Japan, and also for Korean women used as “comfort women”, or sex slaves, in Japanese Military Brothels during the war. Toyoki Sato, lecturer at the […]