On December 10, in between impeachment hearings, Democratic legislators and the White House announced they had reached a compromise on the United States Mexico Canada Agreement, USMCA, which seeks to replace and update the 25-year old North American Free Trade Agreement, or NAFTA.  The treaty now heads to Congress for a full vote. Amanda Countryman […] 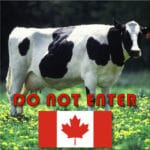 Last month, Canadian company Grassland Dairy cancelled contracts to buy milk from scores of U.S. dairy farmers.  Over 50 Wisconsin farms found themselves with no buyers for their milk.  The issue bubbled up to get the notice of Washington, inspiring President Donald Trump to slap a retaliatory tariff on Canadian lumber.  After much scrambling, including […]