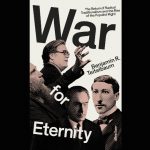 Today, Friday host Esty Dinur and co-pilot Norm Stockwell are joined by professor Benjamin Teitelbaum to discuss his new book, War for Eternity: The Return of Radical Traditionalism and the Rise of the Populist Right. They discuss the influence of Traditionalism (with a capital “T”) on far-right politics, the role of Trump in Traditionalist narratives, […]