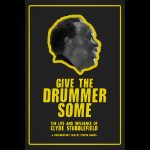 Clyde Stubblefield, best known for his drum work with the James Brown Band in the 1960’s and 1970’s could possibly be the most sampled human of all time.  His drumbeats have reappeared — often uncredited — in countless hip-hop songs.  Stubblefield, who in his later years, called Madison home, died in 2017.  Filmmaker Trevor Banks […]