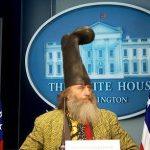 Vermin Supreme has been running for President of the United States since 1992.  During that time, he has run as an Independent, as a Republican, and as a Democrat, but his campaign based on mandatory toothbrushing, zombie preparedness and a pony for every American has yet to lead to a political party nomination.  That may […]