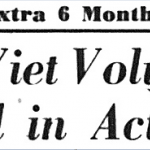 Madison in the sixties. Our Vietnam casualties. Part one.  1965     Marine staff sergeant Roscoe Ammerman, thirty- seven, becomes the first  Madison casualty when he is killed in action in Quang Nam province on October 3. Ammerman joined the Marines at seventeen in August 1945, after dropping dropped out of Central High School following his junior […]