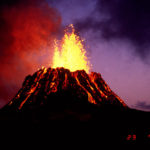 Kilauea volcano in Hawaii had a major eruption, and has continued intermittent small bursts ever since. So, for tonight’s episode, the Perpetual Notion Machine’s Will Cushman talks with Brad Singer, scientist in the fields of geology and geoscience. His major research centers on the historical geology of rocks, primarily those formed by the magma from […]