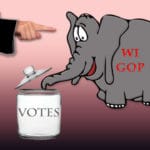 In 2004, Justice Anthony Kennedy broke a 4-4 tie in the U.S. Supreme Court in the case of Viedith v. Jubelierez.  The case involved a redistricting plan completed after the 2000 U.S. census and approved by the Republican-controlled Pennsylvania state legislature.  In his separate, and ultimately, deciding, concurrent decision, Kennedy said that the Supreme Court […]