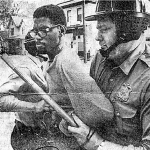 Madison in the Sixties – the Mifflin Street Block Party Riot, part 2 Sunday, May 4, 1969 –  Late afternoon Tear gas lingers in the soft spring air, rocks and bricks are strewn through the streets, all residue of last night’s riot. Mifflanders still want a block party; Mayor Bill Dyke still says no and […] 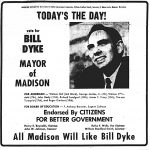 Madison, April 1, 1969. Another pivotal election. In April 1961, the city ended years of liberal leadership by electing a conservative mayor, businessman Henry Reynolds. In 1969, it’s poised to do so again – attorney William Dyke. A former top aide to the Republican lieutenant governor Jack Olsen, Dyke was making his third bid for […]