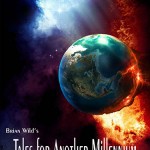 On Friday, December 7, host Jonathan Zarov speaks about the play Tales for Another Millennium with writer and director Brian Wild, and art director Heather Rankin. Tales for Another Millennium is playing at Broom Street Theater.
Says Brian, “One joy about Broom Street Theater is many of us write as we go along, because we like to get our cast and see where the talent is. I had such a talented cast with this one that some story lines became more prevalent, so I ended up writing those story lines a little stronger than the other ones.”

The main plot surrounds a woman named Grace, played by Heather Rankin, who is in Heaven, but wants to return to the world because her family is in a crisis. Although she is not allowed to leave, she manages to escape to return to her family. Also featured in the play are hobbit lawyers and Santa Clause. Brian explains, “I bring in characters that are real, and unreal, and combine them all together” Heather says that the show is fun, “family-appropriate, and an alternative to the normal holiday fare.”

Tales for Another Millennium

Every Thurs, Fri, Sat at 8PM