On Thursday August 23rd, Allen Ruff interviewed Chicago Teachers’ Union member and activist Becca Kelly about the struggle between Chicago Mayor Rahm Emanuel’s efforts to cut educational costs and the harm this has done to Chicago’s schools and teachers. 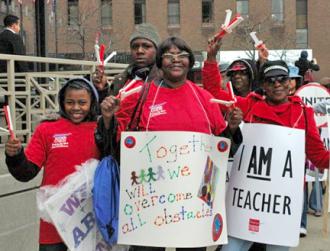 “On Aug. 22, Chicago Public Schools school board members authorized spending $25 million on a contingency plan if Chicago teachers strike for the first time in 25 years. Prior to the board meeting, teachers picketed outside the district office.

Karen Lewis, Chicago Teachers Union (CTU) president told the Board of Education, at Wednesday’s meeting, ‘We have had 45 sessions of negotiations, and we’re still pretty far apart’…

One CTU spokeswoman mentioned that if a contract negotiation is not reached, teachers might take their signs to the Democratic National Convention, in North Carolina, where Chicago Mayor, Rahm Emanuel is a scheduled speaker.

Emanuel’s demands for a longer school day angered the teachers, and this resulted in 90 percent of the union agreeing to strike. Most unions have seen their power slip, and a teachers strike will have ramifications far beyond Chicago. It may set a precedent for organized labor throughout the United States.”

To read more about the situation in Chicago:

To listen to the interview: