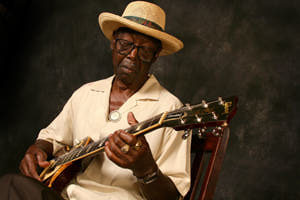 Houston bluesman Texas Johnny Brown died July 1, 2013 at age 85. He was born John Riley Brown in Choctaw County, Missisippi on February 22, 1928. He began in the music business as a member of the Aladdin Chickenshackers and made his first recordings for the Aladdin label backing Amos Milburn as a member of that band. He had a lengthy career and backed a number of artists in addition to Milburn including Ruth Brown, Joe Hinton, Lavelle White, Buddy Ace, Junior Parker and Bobby Blue Bland. He was a frequent studio musician for Duke and Peacock labels in the 1950s. Brown may be most noted for writing the Bobby Bland hit, “Two Steps From the Blues” which became the title song for Bland’s 1961 LP. He stepped away from the music business for a time from the 1960s to the early 1990s. Four of Brown’s recordings from 1949 appear on the Atlantic compilation Atlantic Blues Guitar. Brown finally released an album under his own name, Nothin’ But the Truth in 1996 on the Choctaw Creek label and followed this up with Blues Defender in 2002. Both of these albums are highly recommended if you can find them. I interviewed Texas Johnny Brown in 2002.