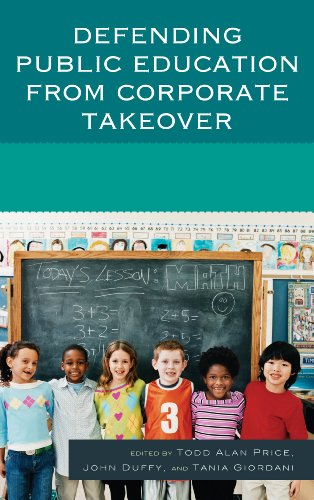 Joining the Friday, 8 O’ Clock Buzz, on April 5, 2013, Todd Price and Elaine Weiss. The two joined the show to talk about the many Chicago schools scheduled to be closed.

Todd Alan Price is the Director of Leadership and Specialized Roles at National Louis University. An Associate Professor in the National College of Education, Dr. Price supports the preparation of educational leaders and directs the doctoral programs. He teaches foundations and research classes to Chicago area teachers and teacher candidates. He is a research fellow with his colleagues on a federal department of education grant, the Fund for the Improvement of Postsecondary Education (FIPSE) where he is studying the implications of universal design for learning and co-teaching in Chicago public high schools. His current book is Defending Public Education from Corporate Takeover, co-authored by Dr. John Duffy and Dr. Tania Giordani.

Weiss is national coordinator of Broader Bolder Approach to Education. She just co-wrote the piece “Closing Schools Despite the Data,” which states: “Mayors and reformers would have us believe that school closures, like the 54 recently announced in Chicago, will save districts money while improving outcomes for students who are moved out of ‘failing’ schools. The problem is, districts have been closing schools for many years — in Chicago, for over a decade — and it’s clear that they won’t accomplish these goals. In fact, the opposite has happened.