Here’s what to expect when they start playing….. Correction:  Right before the group starts playing, bassist Matt Turner jokes that the band is going to take a break. Later in the set, he makes a rubber chicken melodically squawk into a microphone, inspiring keyboardist Terry Harris Jr. to pick up the rhythm.

View a live video performance of the Chicken right here, if you dare! 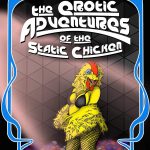 This Chicken’s Got Legs

The Static Chicken began in 2000, inspired by trips that co-founders Turner and Jeremy Kuzniar, the only remaining original members of the group, had taken to the New Orleans Jazz & Heritage Festival.

“We went for night shows at the clubs, mostly,” said Kuzniar, 37. “What interested us most were these thrown-together, almost supergroups and side projects of these guys from other bands, maybe bigger bands. But they were way more interesting to us, because there was always a chance to see something super random and unplanned.

“We had these other main bands as well, but at the time we wanted something we could do on a semi-regular basis, and we wanted it to be completely unplanned, with music played on the spot,” Kuzniar continued. In fact, after all those years, the Chicken never had a single rehearsal, Turner said.

….Kuzniar worried that jazz aficionados would think the Chicken “was discrediting or marginalizing the sanctity of jazz. As time went on, a lot of jazz guys appreciated what we were doing.”

Even if what they were doing was a little weird.

“We were all on a set break, and someone had left a huge shoulder-to-ankle fur jacket at the back of the Estate,” Turner said. “I took my shirt off and put this thing on, and (former sax player) Jesse (Sheehan) said, ‘What if we go out for the second set and play weird disco and call the band ‘Sex Phone’? And we went out there and played disco and made up a song called ‘Sex Phone.'”

To this day the song ends up in sets, as well as weird creations with titles such as “Chuck E. Cheese Is a Ball Pit. It’s Full of Balls” and “The Red Hornet” that Turner said have become fan favorites.

“Really, the fans are the lifeblood of the band,” Turner said. 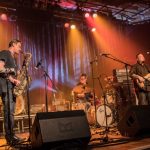