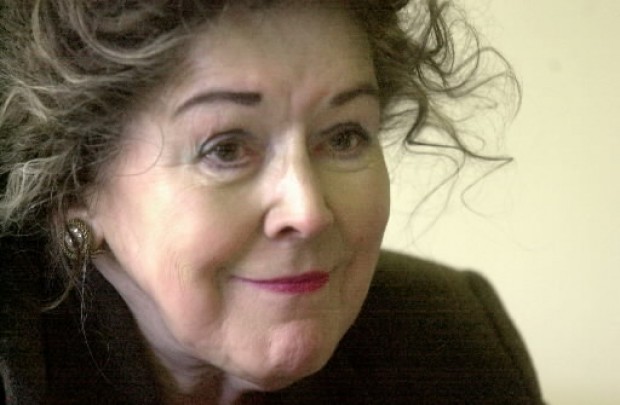 True to form, her daughter, Anne Thurow, would not reveal her mother’s age, even after her passing.

“That was kind of her trademark,” Anne said. When claiming she was 29 became unbelievable, Nancy would sing a little song: “I’m 105, I’m glad to be alive.”

“That was just my mother,” Anne said. “She was one of these strong-minded women who thought it was nobody’s business to ask how old you were. She was very feisty and very firm about it, even in her very last years.”

Thurow set out to transform the theater scene in Madison when she founded CTM with two friends in 1965, a project of Zeta Phi Eta, a professional communications fraternity. Schools had pulled drama programs out of school, so Thurow and her friends decided to bridge the gap.

“They were starting children’s theaters all over the country, the Zetas,” Nancy Thurow said in a 2010 video about CTM’s origins.

One advisor told her, “Do ‘Land of the Dragon,’ you can’t fail.” That was the company’s first show. The first production of CTM’s perennial favorite “A Christmas Carol” was in 1966, and it sold out right away.

Anne recalled that she and her three siblings had to “work harder” than other kids to be cast in a CTM show, so her mom wouldn’t be accused of nepotism. As interest grew, CTM moved from Edgewood College to Oakwood Village to the Civic Center, Anne said. Between 1987 and 2007 it was known as CTM Madison Family Theatre, to emphasize the all-ages repertoire.

“She wanted to provide quality family theater,” Anne said. “Not just for kids, the kind of theater you could bring your whole family to and the parents would enjoy it.

“That was tricky. You had to find a show that was wholesome and not offensive, but would be amusing and not just kid stuff.”

Nancy Thurow had a reputation for being demanding with her student performers (“you could say autocratic,” Anne said). She could be intractable and tough.

“She knew exactly what she wanted until she saw it, and then she changed it,” said Lee Waldhart, who has performed in Madison since 1975. Waldhart acted in and directed shows for CTM, and in 2002 he joined the company.

“She was a stickler for technique … her version of the Alexander method,” Waldhart said. “She was probably the biggest influence on developing children’s theater in town.

“Out of 100 actors in town, I bet 50 percent were trained at some point through a CTM show, class or summer school.”

But though some adult actors may talk about their battle scars from years with CTM, many of them loved her. A Facebook group called “CTM (Children’s Theater of Madison) ‘The Nancy Years’” is full of tributes, nostalgia and longterm relationships formed onstage. Many were remembering the late director on Wednesday.

“Nancy had such an impact on all of us, on and off the stage,” wrote one. “I think about her each time I do my Alexanders before a big interview or furiously scribble meeting notes on a yellow notepad. Thinking of all of my theater friends and family on this sad day.”

Thurow retired as artistic director in 2004, and within a few years the company fell on hard times. In 2006, budget problems forced the cancellation of the remainder of the ‘05-‘06 season, and Thurow returned to help raise funds.

Thurow’s retirement “was kind of like losing Michael Jordan,” Custer said. “She had gifts that were hard to replace and was kind of a miraculous fundraiser. When Nancy retired, it became clear how many functions she served” for the theater group.

Under the direction of Roseanne Sheridan since September 2007, CTM is now a resident organization of Overture Center. The company stages five shows a season in the Playhouse, runs a thriving summer drama school and manages the Madison Rep’s former stock of costumes and props.

“She was an incredible visionary,” Sheridan said. “She was amazingly motivating to both performers and contributors.

“I hope that I can honor her legacy by doing really high quality work that continues to engage the community. … she said, ‘Do your best work and the best will come back to you.’ That’s been a guiding principal for me, to do work with commitment and passion and joy.”

Surviving Nancy are four children in their 50s — Anne, Barbara, David and Jane, who live in Colorado, Los Angeles and New York City — and three grandchildren, Kathryn, Rachel and Truett, between 25 and 30 years old.

Her ex-husband, Walter Thurow, is a practicing attorney with the Wisconsin Department of Workforce Development — Workers Compensation Division. He often played non-speaking roles in CTM shows, like the crocodile in “Peter Pan” or the Ghost of Christmas Yet to Come.

Retirement and a decrease in mobility, in part due to rheumatoid arthritis, was tough for her mom, Anne said. A friend took Nancy to “Christmas Carol” a few years ago, but in recent years she spent most of her time in an assisted living center (Wynwood) on the west side.

“Nancy devoted her life to theater,” Waldhart said. “She was a force to be reckoned with.

“Nancy’s dreams were finally being accomplished now: a children’s theater that is making an impact, really growing the correct way.”

In that 2010 video, Nancy summed up her own motivations.

“Young people need to be acquainted with the theater art, just as much as music or ballet or any of the arts,” she said. “It’s very important for young people to be educated in the theater and learn to appreciate it. … they learn to pay attention, to focus on whatever they’re doing in that moment.

“That’s the truth about life — if you learn to focus all your attention and don’t have your mind wandering, you’re ready to do outstanding work on whatever you do.”