On Thursday October 25th, Norm Stockwell subbing for Allen Ruff interviewed Tova Andrea Wang about her recent book, “The Politics of Voter Suppression: Defending and Expanding Americans’ Right to Vote.” Wang is a renowned expert on election reform and political participation in the United States and around the world. She is a Fellow at The Century Foundation and a consultant to numerous  organizations which promote democracy such as the National Democratic Institute and The Carter Center. 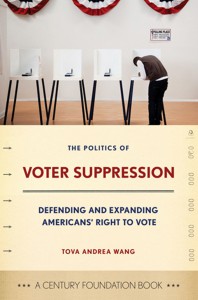 “The Politics of Voter Suppression arrives in time to assess actual practices at the polls this fall and to reengage with debates about voter suppression tactics such as requiring specific forms of identification. Tova Andrea Wang examines the history of how U.S. election reforms have been manipulated for partisan advantage and establishes a new framework for analyzing current laws and policies. The tactics that have been employed to suppress voting in recent elections are not novel, she finds, but rather build upon the strategies used by a variety of actors going back nearly a century and a half. This continuity, along with the shift to a Republican domination of voter suppression efforts for the past fifty years, should inform what we think about reform policy today. Wang argues that activities that suppress voting are almost always illegitimate, while reforms that increase participation are nearly always legitimate. In short, use and abuse of election laws and policies to suppress votes has obvious detrimental impacts on democracy itself. Such activities are also harmful because of their direct impacts on actual election outcomes. Wang regards as beneficial any legal effort to increase the number of Americans involved in the electoral system. This includes efforts that are focused on improving voter turnout among certain populations typically regarded as supporting one party, as long as the methods and means for boosting participation are open to all. Wang identifies and describes a number of specific legitimate and positive reforms that will increase voter turnout.”

Read more about Tova Wang and The Century Foundation: