On Friday August 24th, Esty Dinur interviewed author and professor Michael Klare about his new book “The Race for What’s Left: The Global Scramble for the World’s Last Resources.” Klare is a professor at Hampshire College and also teaches at Amherst, Smith and Mount Holyoke College. He is a defense correspondent with The Nation Magazine and a frequent contributor to Mother Jones and Foreign Policy in Focus. 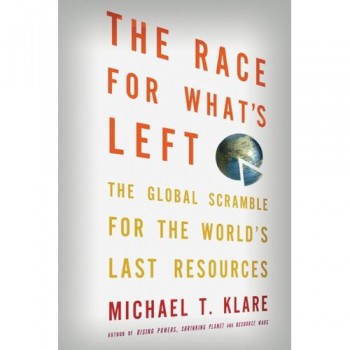 As Klare explains in his recent book, “The world is facing an unprecedented crisis of resource depletion—a crisis that goes beyond “peak oil” to encompass shortages of coal and uranium, copper and lithium, water and arable land. With all of the planet’s easily accessible resource deposits rapidly approaching exhaustion, the desperate hunt for supplies has become a frenzy of extreme exploration, as governments and corporations rush to stake their claim in areas previously considered too dangerous and remote. The Race for What’s Left takes us from the Arctic to war zones to deep ocean floors, from a Russian submarine planting the country’s flag on the North Pole seabed to the large-scale buying up of African farmland by Saudi Arabia, China, and other food-importing nations. As Klare explains, this invasion of the final frontiers carries grave consequences. With resource extraction growing more complex, the environmental risks are becoming increasingly severe.”