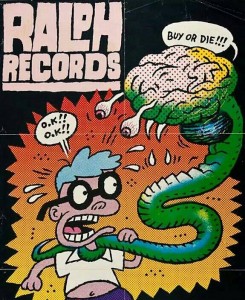 Ralph Records was an independent label based out of San Francisco that started in 1972, and in various incarnations existed until 2010. Ralph was home to some of the most adventurous and un-classifiable music known to popular culture. Not punk, not rock, not new wave… definitely the true definition of “alternative” and “independent”… but sounding nothing like any of the bands you typically attach those tags to.

Vincent Presley is in the process of readying the release of a 3-sided Snakefinger vinyl LP, the previously unreleased concert recording “Live In Melbourne 1981”, due out in Summer 2015 on Secret Records. With a little coaxing, we should be able to hear a little sneak preview of this exciting new project.

This radio program aims to give a wide overview of the exciting music that was released on Ralph over the years, including some underground favorites, as well as obscure rarities. It will be unlike anything you’ve ever heard on the radio before. Or since. Or maybe even ever again. Buy or die!