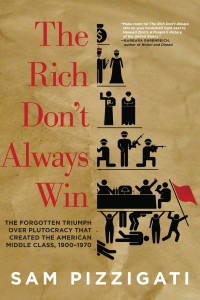 “Polls now show that two-thirds of Americans believe that the nation’s enormous wealth ought to be “distributed more evenly.” But almost as many Americans—well over half—feel that protests against inequality will ultimately have “little impact.” The rich, millions of us believe, always get their way.

A century ago, the United States hosted a super-rich even more domineering than ours today. Yet fifty years later, that super-rich had almost entirely disappeared. Their majestic mansions and estates had become museums and college campuses, and America had become a vibrant, mass middle class nation, the first and finest the world had ever seen.

Americans today ought to be taking no small inspiration from this stunning change. After all, if our forbears successfully beat back grand fortune, why can’t we? But this transformation is inspiring virtually no one. Why? Because the story behind it has remained almost totally unknown, until now.

This lively popular history speaks directly to the political hopelessness so many Americans feel. By tracing how average Americans took down plutocracy over the first half of the 20th Century—and how plutocracy came back—The Rich Don’t Always Win outfits the 99% with a deeper understanding of what we need to do to get the United States back on track to the American dream.”