On Friday November 30th, host Esty Dinur interviewed Iara Lee about her documentary film “THE SUFFERING GRASSES: when elephants fight, it is the grass that suffers.” Iara Lee is a Korean Brazilian film producer, director and activist who works mainly in the Middle East. Esty also spoke with Middle East expert Professor Jennifer Loewenstein who added to the discussion of the film and the crisis in Syria. 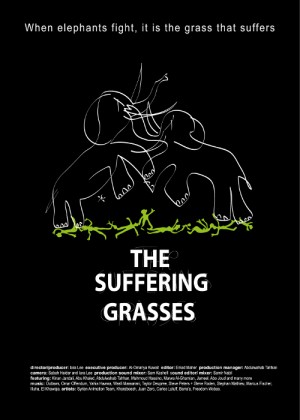 “The ongoing conflict in Syria has become a microcosm for the complicated politics of the region, and an unsavory reflection of the world at large. Against the backdrop of the Arab Spring, NATO’s toppling of Moammar Qaddafi in Libya, and the complicated politics of the region, this film seeks to explore the Syrian conflict through the humanity of the civilians who have been killed, abused, and displaced to the squalor of refugee camps. In all such conflicts, large and small, it is civilians—women and children, families and whole communities—who suffer at the leisure of those in power. While focusing on the plight of those caught in the crossfire of the hegemons, we seek to unravel the conflict by exploring the motivations of its actors—the Ba’athist regime of Bashar al-Assad, the Free Syrian Army and other geopolitical players like the United States, Israel, Russia, China, Iran, Lebanon, Turkey, the Gulf countries… When elephants go to war, it is the grass that suffers. This is a film about the elephants, but made for the grasses.”

Read more about the film, “The Suffering Grasses:”