On Friday October 26th, host Esty Dinur interviewed author and historian Stanley Kutler about the reprinting of his book, “The Wars of Watergate: The Last Crisis of Nixon.”  Kutler will be featured at this year’s Wisconsin Book Festival (November 7-11). He will be speaking at the series “American History In Brief and In-Depth” at 7:30 PM on Wednesday November 7th at the Overture Center for the Arts. 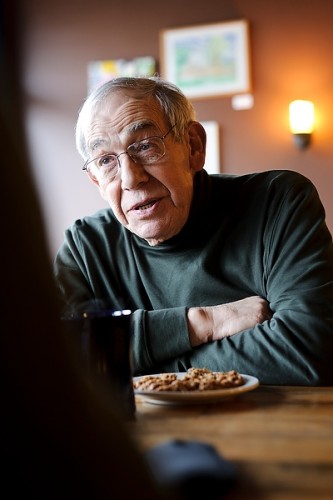 Stanley Kutler is the E. Gordon Fox Professor of American Institutions at the University of Wisconsin Madison. He is the editor of The Encyclopedia of Twentieth Century American History, the historical advisor for the Emmy-winning television documentary Watergate, and the founding editor of Reviews in American History. Leonard Bushkoff of the Christian Science Monitor stated about this seminal work:

“It is balance, breadth of vision, documentary research, historical context, and insight that Kutler provides—lucidly, gracefully, and far better than anyone before him. . . . This book should be regarded as the definitive reply to Nixon’s attempts at rehabilitation. . . . [It] is about ethics, ends and means, and the dangers of an imperial presidency. . . . The republic owes Kutler a reward. It need not be elaborate: Americans need only to read him—and take his book seriously.”

Read more about “The Wars of Watergate:”