There are precious few bands from the early days of rock ‘n roll that are still together and hitting the road to bring their classic and influential music to concert audiences throughout the world. One such band is The Zombies, who formed in late 1961/early 1962 in the Southern region of the United Kingdom, and were responsible for the runaway smash hits “She’s Not There”, “Tell Her No”, and “Time Of The Season”.

Vocalist Colin Blunstone and keyboardist/vocalist Rod Argent front the current incarnation of The Zombies, which includes longtime band members Jim Rodford on bass guitar, Tom Toomey on lead guitar, and drummer Steve Rodford. The Zombies are still performing in support of their latest release “Still Got That Hunger”, which was released in 2015. However, the Spring 2017 Zombies tour, which performs at Madison’s Barrymore Theatre on Saturday, April 15, has an even more intriguing twist. 2017 marks the 50th anniversary of the recording of the highly critically acclaimed album “Odessey And Oracle”, and to honor this auspicious occasion, The Zombies are also bringing original rhythm section Chris White and Hugh Grundy along on this tour, for a 2nd set that features the entire “Odessey And Oracle” release, performed from start to finish. 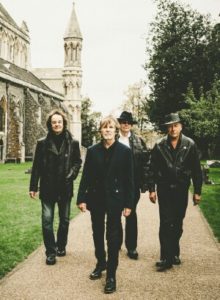 Available on this tour will be the brand new coffee table book, “The Odessey”, which includes handwritten lyrics for all of the songs on “Odessey And Oracle”, as well as many of their other most popular songs. Rare photos, new illustrations by Terry Quirk (who did the original “Odessey And Oracle” cover art), and text by the Zombies in addition to other legends of rock ‘n roll, compliment and complete this unique publication. There will also be autographed items available on the current tour.

For Record Store Day 2017 (April 22) Varese Records are doing a limited edition 7” single on rose colored vinyl of “A Rose For Emily” b/w “This Will Be Our Year”, and The End Records are releasing a 7” record of “I Want You Back Again”, with the 2015 remake on Side A and the original 1965 recording on the B Side.

During the week of March 6th, Rod Argent and Colin Blunstone were doing press in advance of the “Odessey And Oracle 50th Anniversary Tour”, and WORT’s Sal Serio (D.J. el Serpentine) and Aaron Scholz (The Other Mister S.) were fortunate to get interview slots with both artists. Highlights from these interviews are posted here for WORT listeners to enjoy. The March 7th interview with Colin Blunstone was produced for publication in Maximum Ink music magazine (April 2017 issue) and we thank Rökker from Maximum Ink for agreeing to this posting of excerpts from the Blunstone interview. Rod Argent was recorded via telephone at the WORT studios on March 9. Please note that due to the mobile cell phone connection, slight static and/or drop-outs may be noticeable during the Argent interview segments. Every effort was made to correct the noise but still remain faithful to the original conversation.

Special thanks to: Fiona Bloom, John Lappen, Melani Rogers, Rökker, and most especially to Rod Argent and Colin Blunstone.