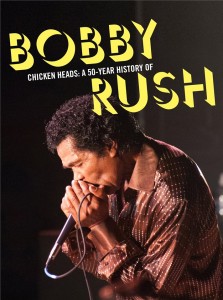 Art Schuna returns to the airwaves on Two For the Blues this Saturday after a 2 month absence and will feature Bobby Rush and Them.

Bobby Rush is celebrating 50 years as a blues performer with a 4 CD box set, Chicken Heads: A 50-Year History of Bobby Rush.   At 80 years old, Bobby Rush shows no sign of slowing down, still performing 200 concerts a year.  He regularly receives awards as a performer.  Chicken Heads is his signature song, released in 1971, but he has routinely produced excellent recordings over the years and this new box set does a great job of showcasing that.  If you ever get an opportunity to see a live performance by Bobby do not hesitate to take it.

Them was a British band who recorded from 1964-1967.  Though they had only 3 records chart in the US, none in the top 25, they are famous for their singer, Van Morrison, whose success would eclipse the band with whom he got his start. A new 3 CD compilation, The Complete Them 1964-67 has just been released.  The reason they are featured in this show is that they were a blues band.  Together with the Rolling Stones, Animals, Yardbirds and John Mayall to name a few, their recordings and live shows featured cover versions of songs originally done by American blues artists.  As these American versions for the most part never got airplay on  American Top 40 radio stations, all of this music was new to us as listeners at the time.  Many of these listeners, including myself, eventually found those original artists and recordings after first hearing these British  cover versions.  This sparked a blues revival in the mid-60s that benefited those artists and the popularity of the genre.  I first heard the blues on air prior to this era as Jimmy Reed and Slim Harpo did cross over to the pop charts but they were a rarity.  I became an ardent fan and collector of this music while searching for the origins of rock and roll as a hobby.  I would not be doing this radio show without that exposure to the British bands.  I’ll be spinning blues tracks from The Complete Them together with the original American blues recordings for those tracks.

I hope you join me this Saturday night from 8-10 PM.