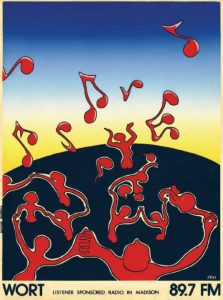 Changes to WORT since my contribution in 2000 to the 25th Anniversary book: computer files are often the source format for the music; MP3 files will soon replace the minidisc as the source format for announcements; our signal is digital, not analog; HD is here (and a WORT-2 signal is planned); the signal is more reliable with better transmitters; and we are not dependent on the reach of the antenna due to the internet taking us to the whole earth; editing has long been via software, not splicing tape. BUT we still have turntables, CD players, and cassette players. A few corrections to that book (and there could be others): I am #9 on the photo and that first blues show, Whole Lotta Blues,  was on Wed., Dec. 3, 1975, not Thursday, and 2 days after the Monday birthday.

Some special people who contributed to WORT & who loved music & who have passed on: George Vukelich, Ed Boyle, and Joel Gersmann (of Broom Street Theatre fame, who reviewed music and bought LPs from us at Discount Records and at Victor—2 world class stores on State St.). Many others had their own connection to music. Tim Farley did a classical guitar & lute show adjacent to mine: he plays many instruments and tunes & rebuilds pianos and now also produces piano concerts.

Other people I encountered: I knew Howard Gelman, who became General Manager and helped me return as prodigal son (my official status!) in 1990 for On the Horizon. Norm Stockwell, who became long-time Operations Coordinator, interviewed me about my bread cookbook on the Breakfast Special about that same time.

Here are some of the musicians who I heard in Madison before WORT started and into the 80’s:
At the Union: John Coltrane Quartet (c.’65), B B King, Howlin’ Wolf, Skip James, John Fahey, Dave Ray (magnificent solo electric guitar), White Trash Blues Band. Other venues: Magic Sam, Freddie Roulette & Charlie Musselwhite, Junior Wells, Rory Gallagher, Electric Flag, Richard Thompson, George Winston, Z Z Top, Blue Oyster Cult. I missed Lighnin’ Hopkins’ impromptu performance on the Union terrace as he rambled through. Missed Dylan. If we add Milwaukee, I heard Cream, Blind Faith, Taste, Rolling Stones. And others would have their own lists of heard and missed musicians. I played their music on WORT. So for me and others, it’s been all about playing the music. I thank all those at Back Porch Radio who let me add more beauty to our world.