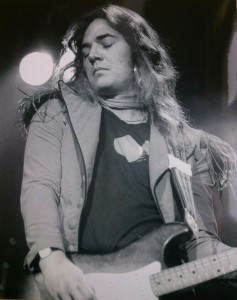 D.J. el Serpentine and “The Rattlesnake Shake” program present a special 3-hour tribute program to one of the all-time great unsung rock/jazz guitar heroes (and Midwest son) TOMMY BOLIN, with this July 31st program (8:00 to 11:00 pm) focusing on Bolin’s break-through year of 1975. Bolin, who came to prominence in the late 60s with the psychedelic jazz-blues-rock group Zephyr before cracking the inception of “jazz fusion” wide open with his influential guitar work on Billy Cobham’s “Spectrum” album (1973), did a couple albums and tours with the James Gang, before landing in Los Angeles in late 1974, where many opportunities lay in waiting.

Sessions with jazz drummer and composer Alphonse Mouzon (Weather Report, Larry Coryell’s Eleventh House) and Canadian hard rock band Moxy resulted in albums and continued exposure, but while working on his first solo release, “Teaser”, Bolin was tracked down in L.A. by one of the biggest touring acts in the world, Deep Purple, to ask if he could do the seemingly impossible – replace the stoic smasher of guitars and camera lenses – Mr. Ritchie Blackmore.

Consequently, Bolin’s “Teaser” album and Deep Purple’s “Come Taste The Band” (which was about 75% written by Tommy Bolin) were released within weeks of each other in the Fall of 1975, and Bolin left for a crazed, massive, world tour with Purple. Not bad for a high school drop-out from Iowa!

WORT-FM and D.J. el Serpentine invite you to come taste the man… Tommy Bolin: singer, songwriter, guitar hero, glam-rock fashion icon, and tragic cult figure (he died at the tender age of 25)… one more time, and celebrate 1975, the year that Tommy Bolin was riding on top of the world. Expect to hear tracks from Moxy, Alphonse Mouzon, “Teaser”, Deep Purple, and more… along with exclusive interview segments produced especially for this program, from musicians who recorded with Bolin in 1975, and those who knew him best.

The timing of this radio special is not coincidental. The next day – August 1 – is the anniversary of what would have been Bolin’s 64th birthday. And the following weekend, August 6-8, is the annual “Bolin Fest” tribute concerts in the musician’s hometown of Sioux City, Iowa. This year’s event is headlined by special guest Alphonse Mouzon, along with Kenny Passarelli (Elton John, Joe Walsh, Hall & Oates), Ed Mundell (Monster Magnet, Atomic Bitchwax, The Ultra Electric Mega Galactic), Black Oak Arkansas, Bobby Berge (Buddy Miles, Tommy Bolin Band), Craig Erickson, Russell Bizzett, and more. Additionally, a special concert event on Friday, August 7, at the Sioux City Hard Rock Casino, features Deep Purple with an opening set by Black Oak Arkansas. Get all the details on the Tommy Bolin Archives website http://www.tbolin.com