On Thursday February 28th, host Allen Ruff interviewed journalist Ruth Conniff about happenings at the State Capitol. Conniff is the Political Editor of the Progressive Magazine and has been a regular on TV pundit shows on CNN, Fox News, and PBS. She still appears frequently on PBS’s To The Contrary and on the Ed Schultz Show on MSNBC. 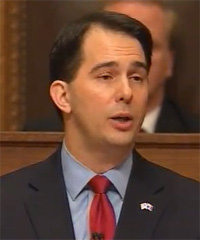 “In his speech today to the state’s biggest business lobby, Wisconsin Manufacturers and Commerce, Governor Scott Walker got a big round of applause when he announced his plan to make 75,878 people go through mandatory job training in order to receive food stamps.

Another applause line: Walker’s announcement that the state won’t accept $65 million in federal dollars to expand Medicaid coverage for the poor…

Walker’s proposals are a particularly cruel joke given his abysmal job-creation record. Wisconsin ranks at the bottom of the region for job growth. And siphoning millions into job-training for nonexistent jobs won’t make those numbers budge. Neither will turning away Federal funds to expand Medicaid. That measure, in addition to leaving poor people without health care, will cost the state jobs in the health care sector.”