Host Karma Chavez interviewed commentator Yasmin Nair about her piece, “Undocumented vs. Illegal: A Distinction without a Difference.” Yasmin Nair is an academic, activist and commentator who lives in Chicago. She has contributed to various anthologies, including “Arab Studies Quarterly”, “Captive Genders: trans-embodiment and the prison-industrial complex”, and “Windy City Queer: LGBTQ dispatches from the third coast”. She argues that  “In representing only the good immigrants, undocumented activists are literally and metaphorically the dream activists of neoliberalism, emphasizing individualized narratives about freedom over systemic critique.” 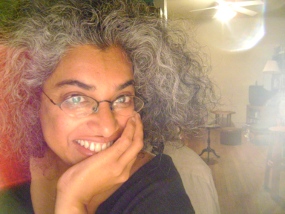 She wrote in the piece, “Given the toxic recent history of the term “illegal alien” and its association with an extreme right-wing perspective on immigration, it is only natural that liberal and progressive activists should want a change in terminology. Yet, this desired change is meaningless. To use “undocumented” instead of “illegal” is to evoke a distinction without a difference. The use of “undocumented” presumes that the only problem facing those who bear the name is a collective lack of documents, that the granting of papers by the State is all that is required to bestow safety and legality upon millions who are here without said papers, and that the biggest problem with the immigration crisis is the terminology we use to describe those who are neither citizens nor temporary residents. In all of this, there is no critique of the larger systemic problems with immigration.”