On Tuesday September 25th, host Cynthia Lin spoke with Brian Miller, Executive Director of United for a Fair Economy,  about the impact of inheritance and privilege when analyzing an individuals economic mobility. 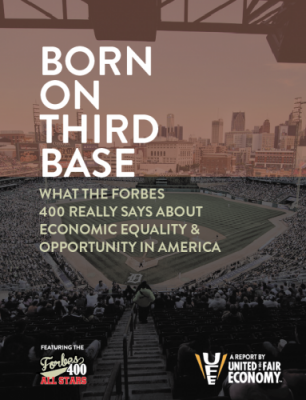 United for a Fair Economy released a report recently entitled “Born on Third Base: What the Forbes 400 Really Says About Wealth & Opportunity in America” :

“Forbes Magazine calls their list of the 400 richest Americans the ‘definitive scorecard of wealth in America,’ but a new report asserts the magazine is misleading. Born on Third Base: What the Forbes 400 Really Says About Wealth & Opportunity in America, released this week by Boston-based non-profit United for a Fair Economy, examines the sources of wealth for members of the Forbes 400 and uncovers the role of inheritance and privilege in economic mobility. The report urges Forbes to stop glamorizing the ‘self-made man’ while minimizing the other factors in wealth accumulation, including tax policies, birthright, gender, and race.

Born On Third Base takes Forbes to task for their misuse of the loaded term “self-made” and the undervaluing of privilege and social capital in financial success. ‘We disagree with Forbes claim that 70 percent of the list made their fortunes entirely from scratch,’ said Brian Miller, executive director of United for a Fair Economy and co-author of the book The Self-Made Myth. ‘The ‘self-made’ and ‘I built this’ narratives wrongly present the opportunity to become rich as equally attainable by all people in today’s highly stratified society. Forbes’ story also ignores the important contributions of others and the role of government in the success of the wealthiest Americans.’

United for a Fair Economy is a national, independent, nonpartisan, 501(c)(3) non-profit organization working to raise public awareness of the destructive effects of concentrated wealth and power and supporting the movement for greater economic equality.”

To read more about United for a Fair Economy: