As thousands of college students gathered to party on Mifflin Street just a few blocks away, around 100 Donald Trump Supporters gathered at the steps of the State Capitol Building Saturday for a “Stop the Steal” rally.

The “United We Stand, We The People” rally had one major theme throughout: a call for Assembly Speaker Robin Vos to step down over his comments that it was illegal to decertify the 2020 presidential election.

Several legal memos have affirmed Vos’ comment that it is in fact illegal to decertify the election results. Several court cases also found that there was no significant voter fraud in Wisconsin, and that Biden won the state of Wisconsin by around 20,000 votes.

The rally began at around 2 in the afternoon, as the truckers convoy met the group at the capitol square to honk their horns and to show their support for the rally. I counted one truck and around four sedans in the massive convoy, which made several laps around the square. Children as young as four years old screamed in joy as cars with “Let’s Go Brandon” flags drove by.

There were several tables positioned around the corner of the capitol square, where people could register to vote and signature nomination papers for those running for election this November.

I started by talking with a group of women who’s table did not seem to stand with any particular group. They were handing out packets of information regarding restricting abortions in Wisconsin, voter fraud, and all the RINO’s, or Republicans in name only, who they took issue with.

Across the plaza from me, a man wearing a “ F— White Supremacists” shirt was walking around recording the event on his phone. Multiple people got up into his face and seemed to be yelling at him, though I could not make out what they were saying.

Hoping to avoid the same fate as him, I struck up a friendly conversation with a man holding a sign. It read, quote, “Ignoring evidence of election fraud because the election is already over is like ignoring a murder because the victim is already dead.”

The man, who later told me his name was Mike, described to me why he was at the rally. 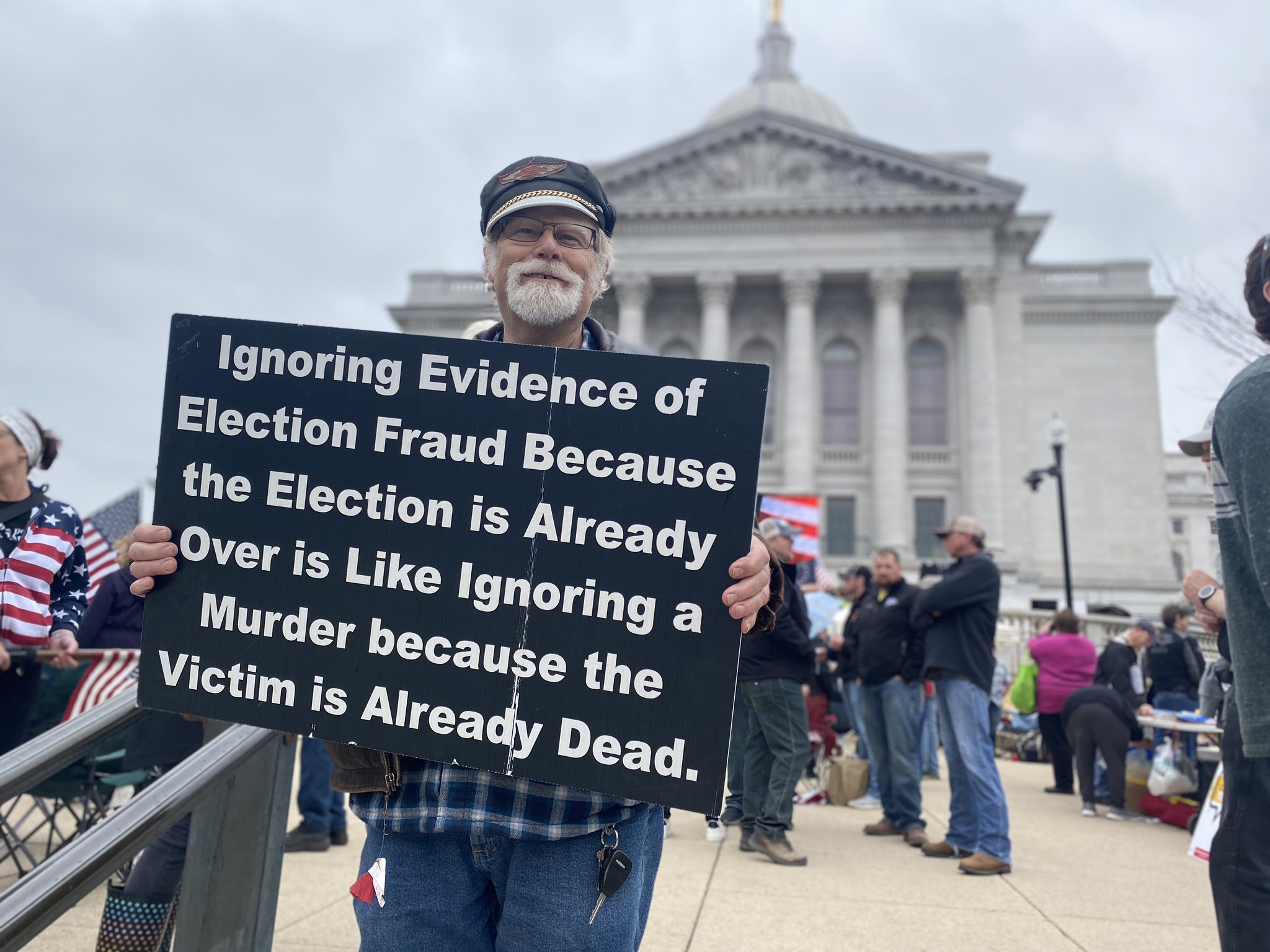 As the rally began in earnest at around 3, a torrent of rain began to fall, setting the mood for the rest of the event.

Brock Maddox began the event with a prayer, calling to  protect those participating in the rally. Maddox is the rally’s organizer and member of the right wing organization Freedom Fighters of Central Wisconsin.

The event did not just attract right-wing activists. As the rain let up, I noticed two men stood on the capitol square holding “honk for Biden” signs. Throughout the afternoon, many people approached the two to exchange words, though I did not hear what was said. But I could see they were hesitant when I approached them, at least until I introduced myself.

I returned to the rally proper just as a torrential rainfall began to pour on the audience, and just as Republican state representative and candidate for Governor Timothy Ramthun took the stage. Wave after wave of far right speakers took to the stage to discuss the 2020 presidential election, the COVID vaccine, and Robin Vos. 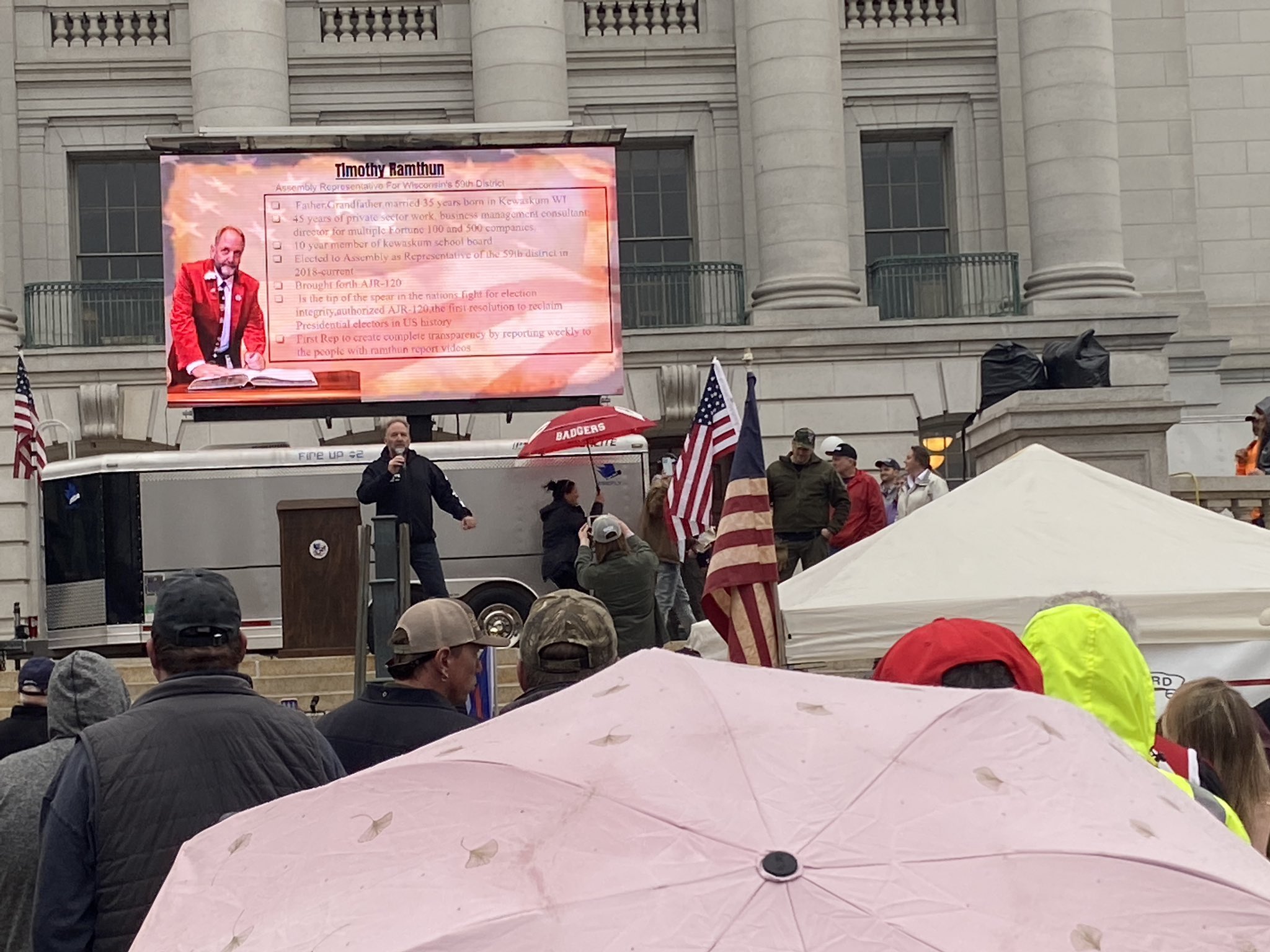 After about an hour of speeches, most of which was drowned out by the rain, I left the rally soaked to the bone.

According to a recent Marquette law poll, only around 4% of republican voters in Wisconsin say they will vote for Ramthun to become Wisconsin’s next governor.