On Friday November 9th, Norm Stockwell subbing for Esty Dinur talked with a number of guests about veterans issues in tribute to Veterans’ Day on Monday. During the first part of the show, Norm spoke with Veterans for Peace member David Giffey who edited the book “Long Shadows: Veterans’ Paths to Peace.” Norm also spoke with Nick Velvet, member of Veterans for Peace and Vietnam Veterans Against the War. 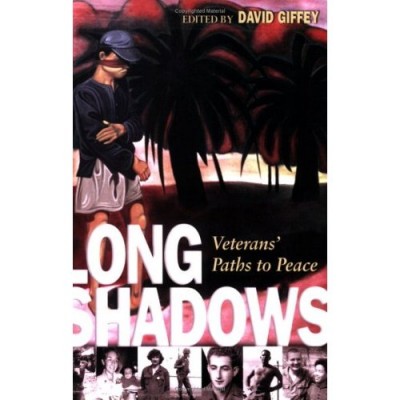 David Giffey’s book, “Long Shadows: Veterans’ Paths to Peace,” was “Winner of the 2008 Montaigne Medal, an award designated by the Hoffer Awards for thought-provoking titles. These are veterans with a point of view whose trajectories of belief had many different starting points, took many different paths, but in every case led to an abhorrence of war.; anti-war feeling among veterans has not been given the attention it deserves, and this volume is an attempt to correct that imbalance, writes Howard Zinn in the Foreword. Veterans speak of war and peace with a certain creditability that others lack. Having experienced war and peace more intimately than many others, their responses and thoughts reflect the life-defining or life-changing capacity of war. Long Shadows is a collection of 19 interviews with veterans who candidly discuss their paths from military involvement to peace activism. Beginning with a veteran of the Abraham Lincoln Brigade during the Spanish Civil War and ending with a veteran of the Iraq war, each tells a unique story with an individual perspective, and yet, each echos the message of the futility and destruction of war. The long shadows of war are evident in each of the interviews, with each participant hoping that his or her experience will inform others and contribute to the public discussion.” -Atwood Publishing