Community radio kicks off participation in Vinylthon 2021, an international celebration of vinyl records, at midnight April 17 with NuFone Rick’s classic rock deep cuts on XLII90 Live Music Radio Hour. Other hosts pledging to spin wax that day include F.R.P. from noon-2 pm with tasty reggae from the Tropical Riddims vault, followed by Gloria Hays and Ankur “DJ Spincycle” celebrating international vinyl on Panafrica from 2-4 pm. Vintage vinyl veteran Rockin’ John spins 7″ and 12″ records as well as LPs on I Like It Like That from 6-8 pm, followed by Two For The Blues with tunes off the original 78 and 45 RPM singles spanning 1928-1970 from Art Schuna‘s collection. Keep reading to learn more about the day’s history and purpose and see our vinyl-lovin’ hosts “wax poetic” about their Vinylthon specials on 89.9 FM!

Vinylthon 2021 is also sponsored by a couple of WORT’s partners:  Spinitron (creators of our playlist software) and the National Federation of Community Broadcasters (NFCB.) 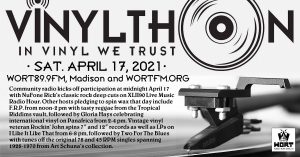 What IS Vinylthon?
It’s an annual event for radio stations across the USA and the world who want to celebrate the format of vinyl music by playing at least one hour of vinyl-only music on the day of Saturday, April 17, 2021. Many radio stations spin more than one hour (some do up to 24!) and it’s fun for listeners and broadcasters alike. The event’s a success because many people were and still are passionate about vinyl, and broadcasting radio shows from only vinyl is an amazing experience for many of today’s radio DJs. It’s also a fundraiser by the College Radio Foundation, a non-profit that organizes the event and gives grants to college radio stations to keep them on the air. This isn’t a replacement for Record Store Day, which would usually be happening that weekend, but RSD folks are partnering to promote it online and in stores. It’s not about selling records; it’s about radio‘s relationship with vinyl, so many WORT hosts are excited to participate by spinning tunes on vinyl as well as about vinyl albums and records. 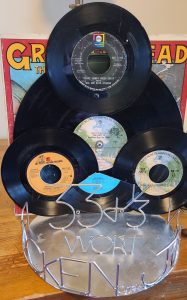 Back Porch DJs give the lowdown on sound decisions & the value of vinyl:

Hosts NuFone Rick and Bobby Lite (of Capitol Boombox, airing every other Wednesday overnight) are thrilled to start the day off at midnight with a show that originally aired on on 12/7/2019. Rick says “This was one of my first programs, and I’m certain that the show is more than 50% vinyl. Expect tracks by Curtis Mayfield and Gladys Knight & the Pips from The First Annual Benefit for the Congressional Black Caucus: Recorded Live September 25, 1974, Capitol Centre, Largo, MD.  Other vinyl plated during the show: Blue Oyster Cult, RU Ready 2 Rock,  Some Enchanted Evening; Genesis, Watcher of the Skies, Genesis Live; Foghat, Honey Hush * Slow Ride, Foghat Live and Etta James, Seven Day Fool, Rocks The House (I remember because this generated my first excited listener call!)”  There’s also some Wilco, Theologians, Spiders (Kidsmoke, Ashes of American Flags) and Kicking Television in this show. Bobby Lite’s picks and commentary are right on, and both hosts are extremely knowledgeable and passionate about live music, so if that’s your jam check out their show this April 17 and on the regular.

F.R.P. says, “As you are aware from my playlists, TT1 & TT2 are part of the weekly production of Tropical Riddims; so, yes I will be playing vinyl. I don’t expect it to be any different than a typical ‘Tropical Riddims’ show insofar in that I will still mix in some new releases in a digital format. But by all means, if a vinyl enthusiast writes something, feel free to forward it to me to be read during ‘Tropical Riddims.” I just purchased some more vinyl; one, a 12″ single, is shipping from Switzerland. Shipping costs as much as the vinyl! BUT, there were only 300 numbered copies pressed, so “where are you going to find another one?” I miss the records in the “Reggae” section in the WORT library, but I have more than enough records to play in the ‘Tropical Riddims’ Vault.’ Have fun and Happy Tonearm Balancing!
Peace, Love and Ras-pect, Frank R. Pérez AKA DJ -F.R.P.- Tropical Riddims

Gloria Hays, one of the rotating hosts of Panafrica with an extensive collection and vast knowledge of music, declares: “I will be playing some vinyl on my show to celebrate this day!” Fellow host Ankur Malhotra, aka DJ Spincycle, joins her direct from Morocco this week with an hour of vinyl curated and mixed from his fantastic library of acquisitions amassed throughout his frequent world travels.

Rockin’ John regularly spins a few beloved, well-preserved platters from his incredible musical treasure trove on his shows, and this week on I Like It Like That his vital picks range from classic Beatles on the original LPs and 7 inches to rare singles and local vinyl-only releases. He’s often declared “These records never sounded better than they do comin’ out of WORT’s turntables!”

Art Schuna tells his story: “I happened to remember that when I had a desktop computer, I had it set up to record old 45s and 78s using an external sound card and turntable which had been modified to allow recording of 78s. I spent a lot of time transferring records that at the time were not available on CD or MP3. I even went to the trouble of eliminating clicks and pops by hand if it wasn’t too extensive. All records used were from my personal collection, and I have about 20 CDs of this stuff. I’m sure there would be enough extra sound in the grooves for listeners to identify that these were from the original record, though most of them are in good condition, suitable for airplay. This Two For The Blues episode will sound quite a bit different than my usual shows as it focuses on single releases and mostly pre-1960, no vinyl LP transfers as I recall.  It’ll be interesting because listeners could very well be hearing stuff they’ve never heard before.”