On Thursday November 15th, host Allen Ruff spoke to David Swanson lead columnist for “War Is a Crime” about peace, war and activism. 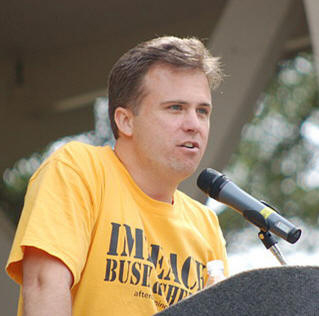 Swanson is also the author of the introduction to “The 35 Articles of Impeachment and the Case for Prosecuting George W. Bush,” by Dennis Kucinich (2008)  and contributed two chapters to Fix America, 2011. Swanson is Co-Founder of AfterDowningStreet.org, creator of ProsecuteBushCheney.org and Washington Director of Democrats.com, a board member of Progressive Democrats of America, the Backbone Campaign, Voters for Peace, and the Liberty Tree Foundation for the Democratic Revolution, and chair of the Robert Jackson Steering Committee. Swanson joined the board of the National Coalition to Protect Student Privacy in December 2011.