Black babies in Wisconsin die at a comparative rate that’s higher than any other state.

And nationally, Black mothers die in childbirth at a rate that’s three times greater than that of white mothers.  According to the Centers for Disease Control and Prevention, most of those deaths are preventable.

Those racial inequities for women and children are why hundreds marched in downtown Madison on Saturday. Protestors marched from the Wisconsin State Capitol to Meriter Hospital and St Mary’s Hospital, where organizers described their own experiences, and demanded change.

The march, titled “We Been Not Breathin’,”  was the eighth day of continuous Black Lives Matter protests in Madison in the wake of the killing of George Floyd. 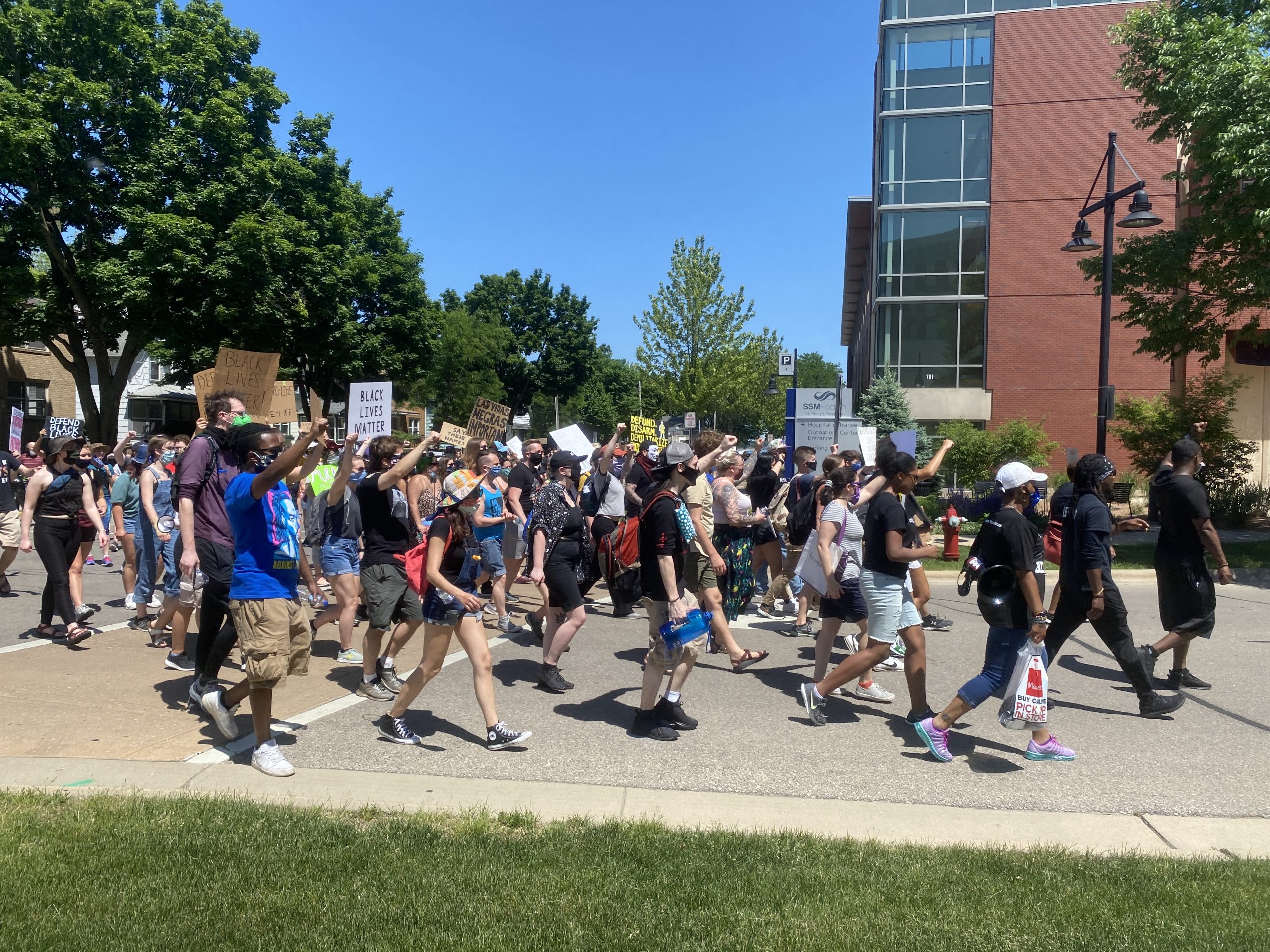 Tia Murray is a doula with Harambee Village Doulas, who organized the march. Like other speakers, Murray linked the call to defund police departments, a main demand of the last week of protests, to black health and wellness.

Felica Turner-Walton is a doula for Harambe Village, and she helped organize the march too. She’s also the founder of Healing Our Hearts, which helps local African-American women grieve their loss.

“We have moms losing babies at substantial rates. There’s no place for us to grieve. When we grieve the loss of our children, we don’t receive adequate care. We don’t receive an envelope with information in it for information to help us grieve. Instead, we get invited into spaces that aren’t safe for us, where we’re told, “Oh, you care about your baby?”. So I decided when that happened to me that I was going to create that space for African-American mom. As an African-American mom, I didn’t have an opportunity to grieve the loss of my son.”

Turner-Walton started Healing Our Hearts, after she lost her child four years ago and later learned that she could not have another child due to a medical procedure she did not consent to. She says the healthcare system doesn’t listen to black mothers.

“Our babies are dying at triple the number of our Caucasian counterparts. Why is that? Why are African Americans dying? Why are our Black bodies treated as medical experiences? We know the numbers, we have the proof. We need more black doctors and labor nurses. We also need defunding of police department. We teach people to breathe. Why does the police department get to take that away from us? No more. When George screamed ‘mama’, I decided to answer.”

A 2019 report finds that in Dane County, black babies die at at least double the rate of white babies. The rate of low birth weight among Black infants is also double that of white infants. Public Health Madison Dane County, which issued that report, attributes that to social and economic challenges caused by discrimination and structural racism for Black mothers.

Nikita Seanior is pregnant with twins and is a high-risk patient. She says she wasn’t heard by doctors and nurses while seeking care at St. Mary’s Hospital.

“But I came here to get my medical help, and they were so nonchalant and argumentative, and just passive about everything I’m going through. And I’m explaining to them that I’m having complications, abominable pain, bleeding, it was horrible.”

After she transferred to UW Health, Seanior later learned she had lost one of her twins.

“My last visit here, I waited in the emergency room for an hour and a half. I’m just sitting there crying, screaming, hollering. My aunt is like, you’ve got to calm down. But I’m trying to keep my composure, but at the same time, no one is listening to me. No one is hearing me. I have to wait to get to the point where I’m irate, where I’m angry, and I get to that angry stereotypical black woman state for you to hear me. And no one still heard me.  Finally when we got back down to the room, it seemed like they were trying to be sympathetic, but there was no follow up, no calls, no nothing.”

St. Mary’s Hospital President Kyle Nondorf says he has only been on the job for six months, but is committed to mitigating racial disparities, and would meet with Harambee Village representatives within the next couple weeks.

While organizers called for better healthcare for Black women and children, they also listed  other demands to invest in black lives.

“I’ve started my career here. Am I gonna be safe? Am I going to come out alive? Are my children going to come out alive? I came here to make a change. My mother birthed four beautiful children. She did that safely in Ohio, and in Illinois.  Why are you terrible here? That’s just a hop skip away. I came here, I’m like I might die tomorrow, and I came here as an adult woman. So where’s my peace? Where’s my safety? Cause I don’t feel it,” says Micaela Berry, also a doula with Harambe Village Doulas.