On Monday April 1st, John Quinlan previewed the performance this Thursday (April 4th) of a one man play–We Belong to the Land–based on the life of world-renowned Palestinian peacemaker, Elias Chacour.  The Archbishop of Galilee of the Malkite Greek Catholic Church, Chacour is also a founder of the nonprofit “Pilgrims of Ibillin,” which works to advance understandings about persons of all faiths living in Israel.  Its projects include the Mar Elias Educational Institutions in Ibillin, where Christians, Jews, Muslims and Druze are educated without regard to religion or ethnic background.  Much of the work of the program is made possible by support from American churches and other institutions and individuals, several of them in greater Madison. 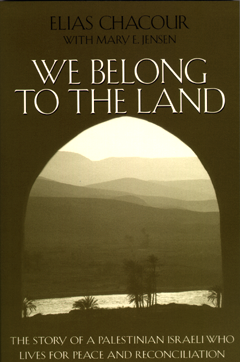 John Quinlan’s guests will include the Rev. Joan Deming (the Madison-based executive director of Pilgrims of Ibillin), and George Shalabi of Sauk City, (retired business person, native of Haifa, Ibillin board member, and lifelong friend of Father Chacour). Joining us on the phone will be actor Bruce Bradley, who will be portraying Chacour, and answering questions about the man whose life he’s bringing to the stage at “The Crossing,” 1127 University Ave., beginning at 7pm on Thursday.

The play tells a remarkable story of peace and reconciliation in the face of a life that began at the time  of the disruption of Palestinian lives that coincided with the birth of Israel.  Born in the village of Kafr Bir’im in Upper Galilee to a Palestinian Christian family, Elisa Chacour’s family was forced to take refuge in the neighboring village of Jish after Bir’im was occupied by occupying forces for Israeli independence.  Chacour and his family became Israeli citizens in 1948, shortly after the establishment of the Israeli state.

An advocate of non-violence, Chacour travels often between the Middle East and other countries around the world. In addition, many visitors, fact-finding missions, and pilgrims have come to Ibillin. In recognition of his humanitarian efforts he has received honors including the World Methodist Peace Award, the Chevalier de la Legion d’Honneur, and the Niwano Peace Prize (Japan) as well as honorary doctorates from five universities including Duke and Emory. In 2001 Chacour was named “Man of the Year” in Israel. Chacour is the author of two best selling books, Blood Brothers and We Belong to the Land.

For details about the event: http://www.thedailypage.com/theguide/details.php?event=301510