With White Mystery headlining WORT’s 40th Birthday Bash this Saturday, I got to play Five Questions (plus one bonus question) with Miss Alex White. In that spirit, I decided to start the game by asking myself one question:

What is one word I would use to describe White Mystery? 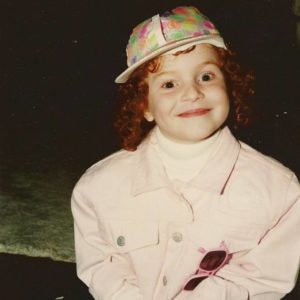 Well, I could say frenetic, but I’d prefer two words: hyper kinetic. You watch White Mystery and it’s a feel of constant motion. The music, fast and relentless. And loud. Nothing fancy. Just face-melting garage/psych/thrash, yet with deceptively compelling lyrical themes. The music can be hypnotic, and sometimes Miss Alex leads us on journeys back to the magical places of our childhood.

On-stage, it’s thunder and lightning. Francis, using the leverage of a long, lanky frame to pound the hell out of his drum kit, is a blur of hands, arms, legs and feet. And Miss Alex furiously attacking her trademark orange Rickenbacker. Lots of fiery red hair flying all over the place.

Having just completed a triumphant tour of Japan, White Mystery is very excited about singing their “Birthday” song to help WORT celebrate its 40th birthday. The band has a long-time relationship with the station, having played at the WORT Underground Stage at the Willy Street Fair in 2013. Miss Alex has done several interviews with WORT DJs and this show marks the second time this fall they’ve played the High Noon. Since their first gig in Madison back in 2012, White Mystery has found itself adopted by a loving audience here. Along with the Willy Street Fair, they’ve played the Memorial Union Terrace and WSUM’s Snake on the Lake Fest, as well as a couple shows at Mickey’s.

Last year was a busy time for White Mystery, and the momentum continues. Despite a demanding tour schedule, the duo put out a new album this year and released their own movie, “That Was Awesome.” Last year, they toured Europe twice and still found time to play Station to Station gigs with Patti Smith, while riding the Amtrak from Chicago to Minneapolis. White Mystery attended the GRAMMY’S since Miss Alex White was elected a Governor of the Recording Academy Chicago Chapter at the beginning of this year. You’ll also recognize a certain redhead on the front cover of a recent issue of She Shreds magazine! SPIN announced White Mystery as a “ROGUE PICK” for South by Southwest (SXSW) last spring, and North by Northeast (NXNE) featured the band for its festival line-up Toronto in the summer.

White Mystery hits the stage at 12:30. Once the carnage is complete, Miss Alex will ascend the balcony and unpack her garage rock 45 collection to spin one of her famous DJ sets through the night, until it’s time to start counting down for the next Birthday Bash!

Now it’s her turn to play:

1. You just returned from a tour of Japan. Can you share some of the most strange and memorable moments?

The first ever White Mystery tour to Japan was incredible. The most memorable part of seven shows in seven days were the other bands— for instance, Don Matsuo from the Zoobombs is an epic Jon Spencer Blues Explosion-style artist from Tokyo who melts faces. Many of the locals showed us how hard bands in Hiroshima, Fujisawa, Osaka can really rock— and be incredibly generous, sweet, caring, and lovely.

2. You hit a milestone this year. You turned 30, which means you’ve been in the music business for half your life. If you could take the DeLorean back to meet your younger self, what advice would you give?

Wow, that’s a great question. I’d tell my younger self, “You’re going to get through this.”

3. Are you and Francis telepathic?

4. Aside from playing as White Mystery at the WORT Birthday Party, you’ll also be DJing. What can one expect from a Miss Alex White DJ set?

Expect to fall in love on the dance floor to the soundtrack of the best in garage 45 RPM records.

5. What are your desert island discs?

The Who “Who’s Next”
Sonic Youth “Goo”
Patti Smith “Easter”

When can we expect a sequel to the White Mystery film “That Was Awesome?”