TBA means To Be Awesome! 5 GREAT bands play on the 900 Block of Willy St. Final lineup:

Kicking off with a bang this year, the WORT-curated Main Stage taps the Smoking Popes‘ Josh Caterer, a big name from the lively Windy City rock scene, for the 1 pm opening slot! The Josh Caterer Trio, led by the frontman for prestigious punk band Smoking Popes, will be kicking off the fair by delivering brand new material debuted during a livestreamed performance at an empty Chicago club (famed underground hang The Hideout) as well as from the similar gig/album release Space Sessions, also named after the Chicago concert hall where that show was performed. With a catchy formula employed by his heyday in their punk rock outfit, the trio’s new live material includes pop-punk styled songs as well as re-imagined covers of classics made famous by Frank Sinatra, Etta James and Willie Nelson, to name a few.

Hailing from Chicago, Caterer first established The Smoking Popes in 1991 alongside his two brothers, Eli and Matt. During a hiatus lasting until 2005, Caterer began releasing solo material as well as performing with Duvall, which featured other Popes alumni. After three more albums under the Popes moniker, Caterer resumed concentrating on his solo work and began collaborating with bassist John San Juan (of Hushdrops) as well as John Perrin from NRBQto form the current trio line-up. Caterer is no stranger to Madison’s live music scene, earning a riveting live reputation among fans. The band will be hitting the stage to start off the day’s festivities at 1:00 PM, and their 90 minute set runs till 2:30 pm.

The Tony Castañeda Latin Jazz Band captures the spirit of what may be considered the Golden Age of Latin Jazz. After establishing his music ambitions with his first band, Olmeca, Tony Castañeda began collaborating with new as well as remaining local jazz musicians on the current project, while influenced by the jazz fusion and psychedelic elements of the previous band. Over 20 years later, the ensemble is still going strong, earning 14 Isthmus annual awards for Madison’s Favorite Jazz Band! Catch them perform at Saturday’s main stage at 3 PM.

November Criminals, hailing from Milwaukee, bring an unrelentingly unique sound to the stage as the only non-ironic polka hip-hop band in the world. The project began in 2011, citing influences such as A Tribe Called Quest and Gogol Bordello, using their lyrical energy towards both socially-conscious ideals (class struggles, anti-fascism) as well as feel-good party anthems (pirates and beer, anyone?) In 2019, the band established prominence in the scene through earning the honor of “Best Polka Band” from the Wisconsin Area Music Industry Awards, aka WAMIs. November Criminals seize the main stage at 5 PM.

Orquestra SalSoul Del Mad is a rhythmic combination of salsa and soul, featuring a 15-member ensemble that culturally fuses a variety of danceable styles, including renditions of Nina Simone, Michael Jackson, Adele and Lionel Richie. The Orquestra comprises a true “melting pot” of styles, featuring an amalgamation of Puerto Rican, German, Portuguese, Italian, Indian, American and Dominican Republican musicians. The Orquestra christened themselves in 2015 at the Latino Musical Festival in Madison and have continued to expand their creative horizons since. Orquestra Salsoul will take the stage at 6:30 PM.

Something To Do (S2D), Milwaukee’s premier long-running ska band, will be closing out the festivities Saturday evening. S2D has been a cherished staple of the Wisconsin ska community since its inception in 2003, providing the perfect up-beat and energetic punch to close out the night. Known for their catchy songs, S2D have six acclaimed albums under their checkered belt and show no sign of slowing down. With a familiarity among such acts as Reel Big Fish, Goldfinger and Vampire Weekend, the band crystallized their success in 2021 when S2D received a WAMI award for “Best World/Reggae/Ska band.” The band will take the stage from 8:30 until 10 pm.

Check out this recent video for a nice taste of what the Josh Caterer Trio will cook up Saturday afternoon!! 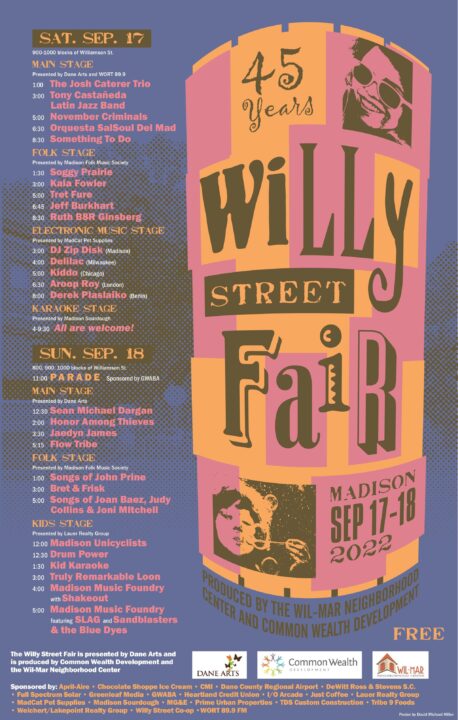