Shattered window glass.  Loose wall fragments.  And an entry door that has come undone from the building.  That was the scene at the Willy Street Treasure Shop in the immediate aftermath of a car crashing into the building last week Monday.

Williamson Street, as it is officially known, is no stranger to these crashes.  Multiple businesses in recent years have had vehicles crash into their buildings.  And the crash into the Willy Street Treasure shop has resurfaced conversation about the problem.

Lance Lattimer is the Transportation and Safety Chairperson of the Marquette Neighborhood Association for the street’s residents.  He says residents are wondering why traffic incidents seem to happen so frequently on Willy St.

He described their feelings as, “general incredulousness at how, on a 25 mile-an-hour street, this can keep happening with such severity.”

“Medical accidents can happen anywhere, and drunk driving can happen anywhere.  But if people are going the posted speed limit, it’s pretty seldom that you should be crashing into quite a solid building and causing this type of damage over and over again.  There’s clearly a reckless driving problem and a speeding problem in the area,” says Lattimer.

Edward Marshall is Lieutenant of Patrol for the Madison Police Department’s Central District. He says there’s been an influx in traffic lately because of construction.

“I’m at least seeing maybe a little bit more traffic right now,” said Lieutenant Marshall.  “I think we’re seeing a return to more people commuting into the isthmus and into the Capitol area with, I wouldn’t call it the ‘end’ of the pandemic, I wouldn’t know where we’re going with that.  But I think people are returning from telecommuting and that’s going to add more vehicle traffic.  At the same time, obviously the construction nearby is going to have some people driving on Williamson Street a little bit more often to avoid traffic snarls at Blair.”

But that may not account for incidents that happened before the current nearby construction.

I visited Willy Street last Wednesday to sample the atmosphere on the roads.  For the afternoon on a weekday on a street with homes and small businesses and with a speed limit of 25 miles per hour, it was busy. 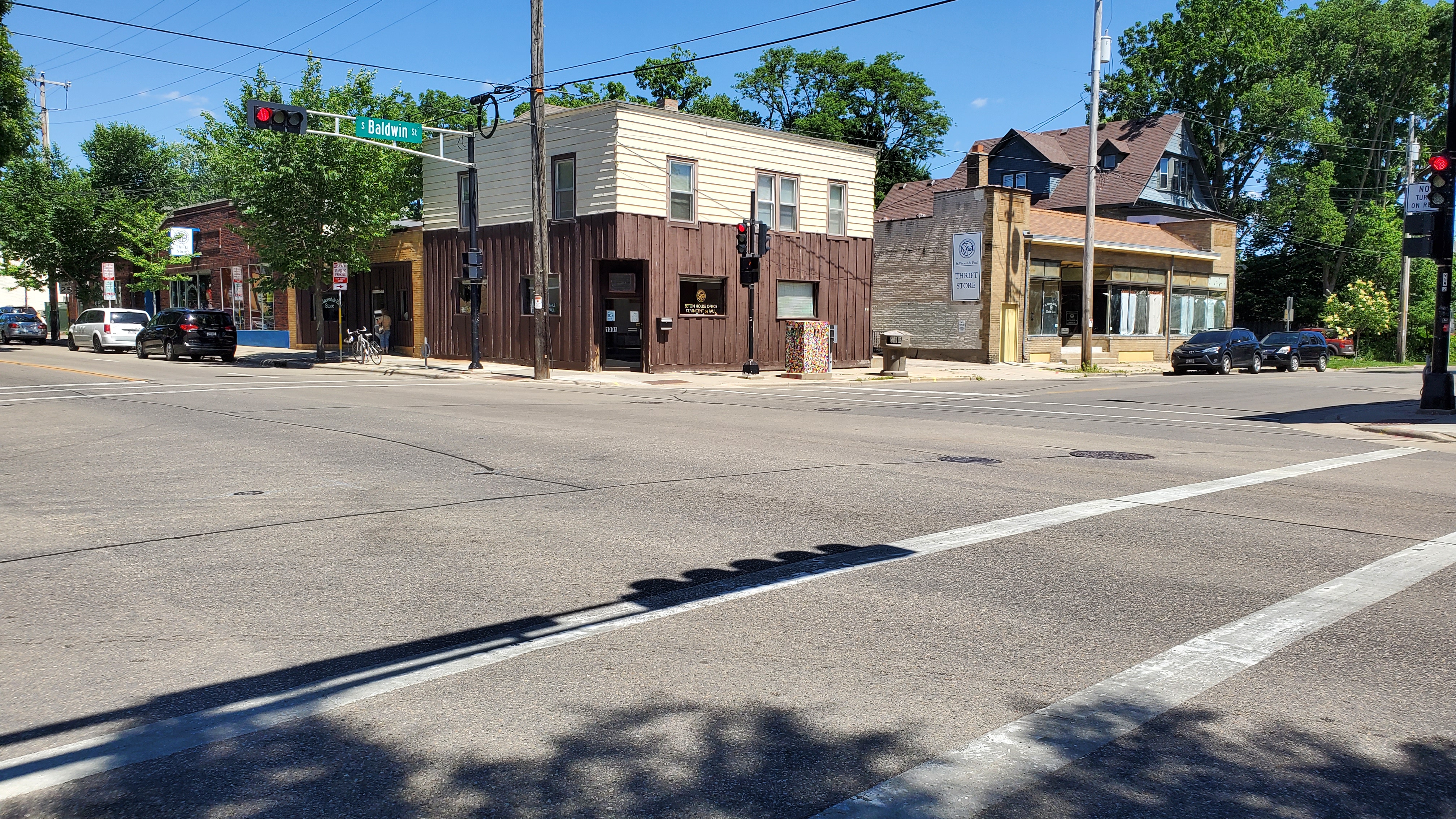 Much of the northbound traffic on Willy Street stems from John Nolen Drive, where the speed limit drops to 25 miles per hour just before the intersection of the streets.  The limit is at 35 before that, and as high as 45 as drivers approach Lake Monona and Monona Bay from the south.

As part of my Willy Street tour, I spoke to owners and employees of businesses that have been affected.

Mother Fool’s Coffeehouse sits on the corner of Willy Street and South Ingersoll Street.  A crash into the building in 2016 destroyed their handcrafted front mosaic, and forced the business to suspend operations for a month.  Jon Hain, one of the owners, describes the driving behaviors he has seen.

“I’ve seen very close calls with kids on bikes, with cars running red lights.  That happens fairly frequently during the rush hour that people race to catch the red light.  I’ve seen up to five cars go through a red light,” Hain recounts.

Ha Long Bay, a Vietnamese restaurant on the corner with South Dickinson Street, was hit by a car in 2018.  It closed the restaurant for over four months.  Owner Jean Tran worries most about bicyclists on Willy Street.

“The street is very narrow, it’s tough.  The most I worry for is the bicycles.  I don’t want anybody hitting a bicycle,” Tran says.  “And how we’re going to prevent that, I don’t know if we can do the bike lane on Willy Street.  That’s what I’m hoping to see but I don’t know if that will happen or not.”

Then just across the street is an Ace Hardware store.  One of the part owners, Tom, describes the close call his store had.

“Oh gosh, maybe six months ago, late at night, someone came around the corner and broke our telephone pole, hit two cars I think, and then careened down the street.  The car basically was undriveable.  The police came and everything.  The guy was pretty drunk or something, I don’t know.  But anyway, luckily he did not hit our actual building, but he came really close.  He hit the bike rack and took that down.  But yeah, as far as our building, we’ve been lucky so far.  We’ll keep our fingers crossed.”

Also on Willy St is Change Boutique, which describes itself as an ethically-sourced clothing store.  Change Boutique was hit in 2021 and also was out of business at that location for four months.  Owner Nikki Anderson says that the large windows at the front of the store give her a clear view.

“This intersection in particular has been the site of a lot of reckless driving, many collisions here, thankfully no pedestrian accidents at this intersection,” Anderson says.  “But just a block down there have been many pedestrians hit by cars.  So yeah, it’s pretty common.”

Incident reports by the Madison Police Department show eight motor vehicle-related reports on Willy St since the beginning of 2020.  Three were collisions with buildings, two were crashes with another car, one involved a car hitting a tree, and in another, the vehicle hit a pedestrian.  One incident involved road rage.

These occurrences took place in spite of Vision Zero, a signature initiative from Mayor Satya Rhodes-Conway to eliminate traffic-related deaths and serious injuries by 2035.

One of Vision Zero’s focuses is speed control.  Consultants for the City of Madison say that reducing a car’s speed by ten miles per hour can drop the risk that a collision with a pedestrian causes death or severe injury by over a third.

So what do these business owners want to see happen to, so to speak, curb these incidents?  Tom from the Ace Hardware store hopes to see stricter law enforcement.

“So I think enforcement’s a huge issue, and how you do that with the budget’s we’re on nowadays, I don’t know,” said the part owner.  “But I think it’s gotta be done because otherwise those people are just gonna keep on doing it.”

And as Lieutenant Edward Marshall pointed out, there is the intention to increase patrolling in the vicinity of the street.

“My expectation for my officers working in the Central District in the isthmus is they provide, largely throughout their shift, extra patrol through the East Washington corridor.  That’s part of our plan to reduce traffic incidents with vehicle versus vehicle, vehicle versus pedestrian, etcetera.  So we’ll see more officers in that area, but some of that activity is obviously going to filter down to the Williamson Street area too.  So we’re going to add more directive patrol for our officers to try to spend a little more time conducting traffic or monitoring traffic in the Williamson Street area as they can or as calls for service allow.”

Craig, a server at Ha Long Bay, shared his ideas.

“Usually the knee-jerk reaction is to add more lights if there’s an accident of any sort, but I think there’s (sic) enough lights, then traffic generally is probably slow enough during the daytime because there is enough traffic to slow it down.  Some people might say get rid of parking permanently to get two lanes.  I don’t think that’s necessary per se because parking is an issue around here because there’s a lot of small business.”

In fact, Jon Hain from Mother Fool’s hopes, among other things, for parking to be loosened even further than it is currently.

“It’s very controversial in this neighborhood to talk about removing the rush hour parking restrictions,” Hain says.  “I do think that would be helpful to slow things down, and I am sympathetic to the city’s argument that it’s necessary for commuters.  Which could also lead us to a discussion about more investment in mass transit and making that function better so that there are less cars.  So there’s a lot of policy things that could happen towards it.  Some of them are incrementally moving in that direction, and some I don’t think there’s political support for.”

So what are the elected officials calling for?  Yogesh Chawla is the supervisor from the county district that encompasses Willy Street.  He believes the city can base improvements to the street on changes made elsewhere.

“I think we’ve identified an area of Madison where we see a disproportionately high amount of traffic accidents and we see a real safety concern.  So I think that we really need to focus on the area first in terms of traffic enforcement with an eye towards safety.  And we need to look at some of the great improvements that have been made in terms of some of the crosswalks there and signage and whatnot, and also the reduced speeds on East Washington.  We have to look at how effective that is, and I think we need to basically go from there.”

Brian Benford is the Madison alder whose district, like Chawla’s, includes the street.  He presented two specific ideas.

“That would look like curb bump-outs at our curbs, narrowing the street, much more canopy trees.  There’s research that shows that trees and more green canopies has a calming effect that slows people down.”

Tom Mohr, a Traffic Engineer for Madison, had his say on these ideas.

The canopy trees idea appears to be more practical in Mohr’s eyes.

“I know this was brought up during the reconstruction process which was back around 2011/2012 during those discussions and there was a push for undergrounding the overhead lines.  If that were to happen, I don’t speak for forestry but that would open up the possibility for larger trees.”

In the end, for Alder Brian Benford, it’s about how the street is viewed.

“I would love to see the perception change where it’s a street for destination, where you come to visit our amazing small businesses or you come for a purpose.  Until we do that, we’re always going to run into incidents.”

And Jon Hain from Mother Fool’s calls on drivers to be more careful on the road.

“I just hope everyone sees these incidents and recognizes that we all have a responsibility when we’re driving in any neighborhood to go slow.  It’s not worth it for the couple seconds you may gain if you’re going to affect someone’s business, your own potential health or life, et cetera.”

A tip surely that the cars that passed by in that moment could heed.