Environmental reform was at the forefront of state legislative proposals introduced last Friday.

One of the larger proposals came in Senate Bill 773, which would involve the creation of the Wisconsin Climate Corps. This state-based program would fund environmental restoration and innovation projects with a sponsoring nonprofit organization.

If passed, the Climate Corps would offer employment opportunities for youth workers between the ages of 16 to 30. These participants would earn a $15/hour wage, receive housing stipends and health insurance, and 50% of them would need to be from underserved populations.

Chelsea Chandler is Climate Solutions Director at Clean Wisconsin, an environmentally-focused group that has lobbied in support of the bill.

She says the participants would help advance numerous different environmental projects across the state.

“The bill itself is basically creating a state-wide program to engage in climate related work, like restoring natural lands, climate resiliency projects, and projects in home energy efficiency and weatherization,” explains Chandler. 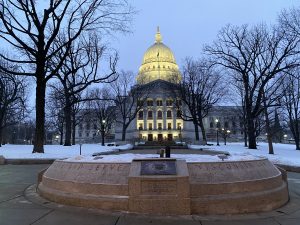 A list of legislators were involved with the bill, including  Senator Melissa Agard, a Democrat from Madison, and Chris Larson from Milwaukee.

“So it is, as the name kind of implies, and for those who follow history and follow the Civilian Conservation Corps that was built as part of the New Deal Era of giving people jobs in times of unemployment. Given the huge disparities of wealth in our country and given the huge problems of climate change, this helps solve both of those with one piece of legislation,” says Larson.

The bill is part of a larger environmental package unveiled by state Democrats last month. It’s called the “Forward on Climate” package, and it consists of 22 bills focused on increasing employment opportunities through socio-environmental programs.

Senator Agard was one of the key supporters of the bill package, and she urges the importance it has on young adults.

“Not only does this bill implement education for younger generations, but it also is a path towards employment and training for young people in Wisconsin by immersing them in hands-on opportunities to not only learn about themselves and increase their employment opportunities but also to invest in our outdoors across Wisconsin,” says Agard.

Also included in the bill? Funding for special education, which senators Larson and Agard admit is unrelated. They tell WORT it represents their ongoing effort to improve education in the state.

The bill comes amidst the ongoing voting process in the U.S. Senate over the Build Back Better Act — a $2 trillion initiative from the Biden Administration that, among other things, aims to increase funding for environmental projects like a federal Civilian Climate Corps.

Senator Agard says, though they are at different levels, they represent the same effort.

The bill is currently under consideration by a senate committee; the next stage in the process – a public hearing – has not been scheduled