As a relative newcomer to the summer music festival circuit (having only attended Bonnaroo and Summerfest in the past), I wasn’t sure what to expect from Lollapalooza. I’ve often heard it hailed as one of the best festivals, which I figured must be true since the headliners are Paul McCartney, Metallica, and Florence + the Machine; after experiencing my first day, I can attest to the awesomeness of the event. 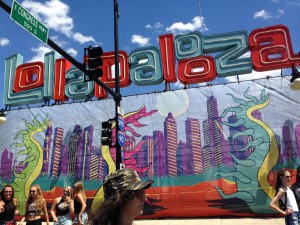 I arrived to the festival tired and a little dejected from a long bus ride from Madison to Chicago and a hot day, but was excited nonetheless to see all of the music and take in the whole ambiance of this new environment. First I headed to the press area to do an interview with the Australian rock and roll band SpookyLand. They were a very nice group of guys that told me about how they formed as a band and explained why they’ve branded themselves (on their Facebook page) as a “solipsistic rock and roll band.”. In the background of the interview, Glass Animals can be overheard. Though I could only hear and not see them from the press area, they sounded incredible, and I enjoyed hearing their fan-favorite “Peanut Butter Vibes.”

Following that interview, I headed over to the Samsung Galaxy Stage, where I intended to stay throughout the night so that I could get a prime position for Paul McCartney. Luckily two bands that I really enjoy were playing that stage, so I was happy to stay there! First was Cold War Kids, a group that, from my experience of seeing them live in the past, always excites their crowd and attracts some super-fans. This time was no different, as they played their hour-long set alternating between fan-favorites and new songs that combined to create an enjoyable and dynamic act. Next up was Alabama Shakes. Though I’m not as familiar with the names of their songs as I am with Cold War Kids, I do know the incredible power and talent of lead singer Brittany Howard, so I was very excited to see them live. Simply put, they were amazing. Brittany blew my mind with her vocal strength and made the hour of watching them go by so quickly that I was surprised and sad when it ended… but the sadness quickly faded when I remembered that Paul was just one hour away! I hastily met up with my brother, who came specifically to see Paul, and we jammed ourselves into the crowd, finding a spot that was kind of near the front and perfect for seeing the big screen broadcasting Paul to the huge crowd.

Having seen Paul in Pittsburgh with my parents last summer, I thought I knew what to expect from this show: energy from both Paul and the audience, little anecdotes from Paul between songs about his relationships with Jimi Hendrix or Eric Clapton, heartfelt dedications to all of the other Beatles. All of these were present in this performance, but turned up one million percent. The show was indescribably awesome. He played tons of Beatles songs (many of my and my brother’s favorites!), told stories that were equally funny and awe-inspiring, since they tell so much about the history of the 1960s and Paul’s importance to the decade, and performed the single most epic rendition of “Live and Let Die” imaginable, fireworks and all. He brought Alabama Shakes’ Brittany Howard out to help him play and sing “Get Back,” which was magnificent, and ended the set with the Abbey Road medley. As the audience joined in for the classic “…and in the end, the love you take is equal to the love you make,” I truly felt like the luckiest girl in the world, seeing my favorite artist of all time with my brother.

Needless to say, today was amazing. See you tomorrow for day two!

PS – for more #WORTatLolla2015 updates, photos of shows, and interviews, follow us on other social media!