We arrived in Katowice in southern Poland for the first day of the WOMEX World Music Expo. Katowice is an industrial town, noted for coal mines and steel works. Not the most charming city we every visited, but these days Katowice is experiencing a renaissance. Arts and entertainment are taking center stage

with the construction of a modern complex containing the Polish National Radio Symphony Orchestra Hall (NOSPR), the International Congress Center, and the Spodek Arena. WOMEX is using performance, trade fair, and meeting spaces in all of these facilities.

Each year WOMEX opens with a gala concert featuring performers from the host country. This year, three Polish folk groups joined up with the Aukso Chamber Orchestra. The three groups (Lautari, Kapela Maliszov, and Vołosi) are all known for their contemporary approach to folk music. With the addition of Aukso, the audience was treated to a genre bending experience shifting from folk to jazz to classical with large doses of improvisation. While the result was enjoyable, the event was a little disappointing in that there were no examples of traditional Polish music presented in its original style. One left the concert hall without experiencing the roots of Polish music. Luckily, other Polish music showcases are scheduled over the next several days. Let’s hope for something more representative. 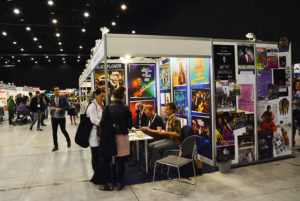 Daytime at WOMEX is all about networking. The trade fair totals 300 stands run by 700 delegates from 90 countries. The stands are hosted by a variety of organizations including individual artists, record labels, festivals, artist agencies, and arts councils which are generally grouped geographically. For example, one can roam down one aisle and speak to representatives from Norway, Finland, Sweden, and, separately, Samiland. Spain is represented by one of the largest areas, with conference tables and numerous delegates. Curiously, Catalonia has its own stand. Around 4pm each afternoon, about ten stands break out special delicacies and beverages to host a happy hour. From a simple local brandy, to rounds and rounds of beer and wine as well as the local cheeses. Don’t miss the Dutch and Swiss cheeses or the Belgian beer! The Norwegian party turned into a jam session when a member of the Hungarian Roma band Parno Graszt stopped by with his guitar and was joined by mandolin, fiddle, and nyckelharpa! YouTube: Parno Graszt meets Sweden at Womex 2017

We walk through the trade hall hitting as many countries and artists as possible. Back home, people often ask me, “How do you find the music you play on-air?” WOMEX is a big part of that process. I approach a record label booth and let them know I’m a world music radio programmer looking for music to include in my playlist. Then they run down their artist roster, explain their new projects, and provide me with a sampler CD, if not a handful of promo recordings. This year, the representatives at the Czech booth have been the most accommodating. I’m glad we brought an extra duffle bag.

One highlight of the daytime schedule are the artist showcases. On the first full day (the day after the opening concert), we were treated to two splendid acts. First up was Luciana Jury from Argentina, a dynamic singer/songwriter with a wide-ranging voice, sometimes gravelly, sometimes falsetto. The highlight of the day was the Jordanian/Greek duet of Vasilis Kostas and Layth Sidiq, on bouzouki and fiddle. They produced a mystical soundscape, effortlessly travelling from one tragic melody to another, always ending with a bit of hope and excitement. Their playing was stellar and featured Ridiq’s velvet voice.