At 7:15 p.m. Friday WORT will interrupt the Blues Cruise in order to present a live performance by bilingual Louisiana indie-rockers Sweet Crude.  At 9:15 p.m. WORT returns its listeners to Central Park in Madison, where funky New Orleans horn heroes Bonerama will keep the party rolling.

Here’s what WORT and La Fete de Marquette fans are in for Friday night. 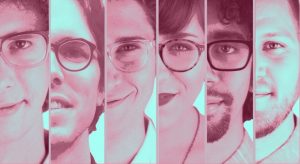 Sweet Crude is a fun, fresh 6-piece band with an oxymoronic name (appropriate for the oil-rich Gulf Coast).  They dissolve 4-part harmonies into tribal rhythms laced with pop hooks.  Players Jon Arceneaux and Alexis Marceaux have roots in the French-speaking Cajun culture of south Louisiana.

Primary lyricist Sam Craft is proud to write songs in the Louisiana-French dialect.  “We want to show that the language is still alive and kicking, and that it sounds great in any genre,” he says.

Sweet Crude has released a pair of EPs, Critters and Super Vilaine.  Members hail from such New Orleans indie bands as Glasgow and Big Rock Candy Mountain.  They describe their new sound as loud, happy and cathartic dance music.  It’s progressive yet regional at the same time.

Sweet Crude is scheduled to perform at Bastille Days in Milwaukee on Thursday (July 14th) and at La Fete de Marquette Friday from 7:15 till 8:30 p.m.  Let them take you to the fertile soundscapes of their native Louisiana. 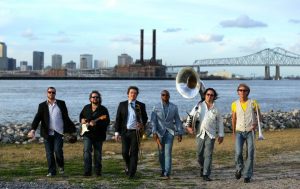 Bonerama takes its funky horn-driven show to the La Fete stage at 9:15 p.m. Friday. Featuring trombonist-singers Mark Mullins, Craig Klein and Greg Hicks, these veterans of the New Orleans scene are “calling you to shake it, baby.” Guitarist Bert Cotton, drummer A J Hall and bassist/Sousaphonist Matt Perrine round out the group.

Purveyors of innovative covers as well as rootsy original songs, Bonerama has recorded or performed with such legends as Dr. John, REM, Tom Morello and Jill Sobule. They carry their instruments like trophies, but play them like lovers.

La FETE de MARQUETTE
La Fete de Marquette is an annual four-day celebration of music from  the Francophone world.  Free and open to the public, it’s always held around Bastille Day, and it salutes the early French settlement of Wisconsin as well.

Located at spacious Central Park in the former industrial corridor on Madison’s near east side, it runs from Thursday (July 14) through Sunday (July 17) this year. La Fete de Marquette benefits the Wil-Mar Neighborhood Center and is sponsored by the Willy Street Co-op.

WORT 89.9 FM Community Radio is proud to bring this tasty slice of Southern culture to its loyal listeners. Your multi-media ami is available anytime, anywhere you have an Internet-connected computer, at http://www.wortfm.org.